25 years old today and still better than everything released since.

Feel free to use this thread to talk about how great it is/Talk Talk were. 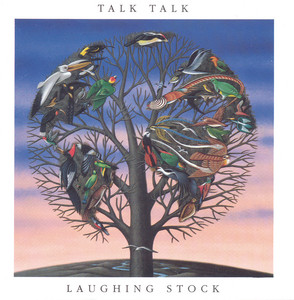 I’ve never listened to Talk Talk. Will probably get around to it at some stage.

Outrageously good album. Also im repeating myself from the old forum but it’s worth checking out this, which is the only predecessor for the type of sound and structure they created on after the flood, new grass et al (except the drums)

Ace - I’ve not heard this so I’ll check it out later today.

Both Laughing Stock and Spirit of Eden feel like unique islands of sound that stand apart from everything else, so always interested to hear things that are reminiscent in some way.

The most recent These New Puritans albums has something of a Talk Talk vibe to it as well. Might interest you if you haven’t tried them already.

That’s a really good record. It has that similar kind of pastoral, melancholy feel that Talk Talk mastered.

It’s a funny thing that the main guy in TNP has such a… well… crap voice, but that somehow it adds to the overall feeling and vibe of their records.

Yeah TNP have an obvious Talk Talk vibe. So do Zelienople and Her Name Is Calla in some parts, two lovely bands anyway

Those three Talk Talk records, I’ve found that nobody does piano sounds as good as Mark Hollis. Every chord gets me every time.

‘I Believe in You’ from Spirit of Eden is one of my favorite songs ever. Just beautiful.

I know what you mean! When I wasn’t sure if you had listened to them or not I was tempted to type “if the voice doesn’t bother you.” I think the voice works quite well because it adds a sort of unnerving quality to it all. It is grating but not enough to be a negative.

Looking forward to whatever they do next, I’d be surprised if they didn’t release something next year.

hope you enjoy - i’d be surprised if you didn’t

It’s beautiful isn’t it? It feels so still and intimate.

I wasn’t aware of it until a few years ago, but it’s as perfect as the latter Talk Talk material.

I’d heard they were recording, so hopefully there’ll be something soon!

You know what mates, I don’t know that I’ve ever heard a note of Talk Talk. I’m gonna get some music this weekend, might give this shit a whirl.

(If it turns out to be gash, I will look for you, I will find you and I will kill you.)

just throwing out a Bark Psychosis comparison because they’re much better than TNP.

one of the greatest albums ever, maaaaaaan