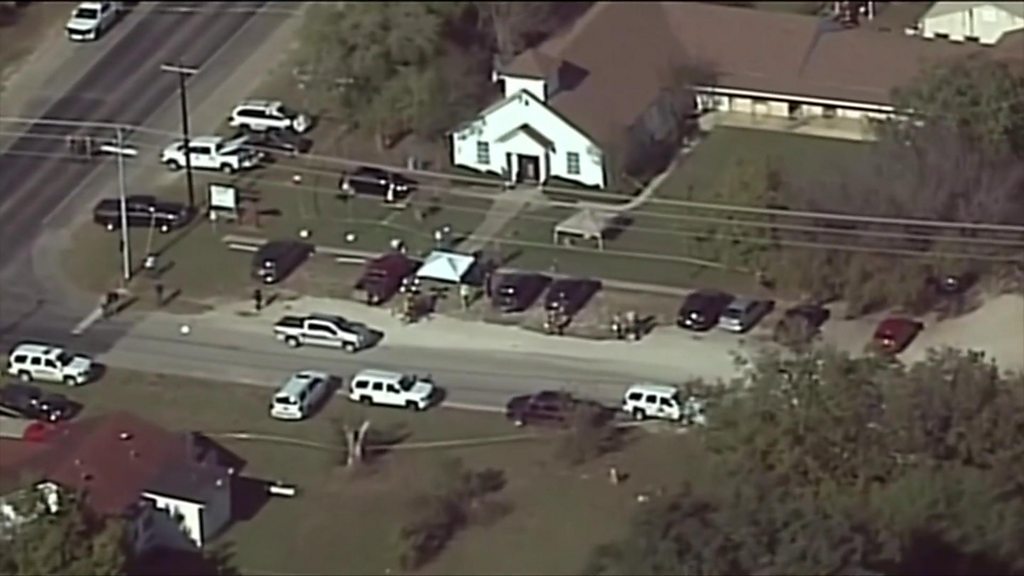 A gunman opened fire at a church in Sutherland Springs in the worst mass shooting in state history.

I should be surprised at this news, I’m really not though. Absolutely grim.

Just feel numb about this.

Just three things certain in life: death, taxes, someone does a mass shooting in America.

Where were the good guys with guns to take down the bad guy with a gun.

President Donald Trump said Monday that he believes the Texas church shooting was caused by a “mental health problem,” not an issue with gun laws in the United States.

“Mental health is your problem here,” Trump said, noting that “based on preliminary reports” the shooter was “a very deranged individual.”

“This isn’t a guns situation,” Trump said. “This is a mental health problem at the highest level. It’s a very, very sad event.”

As is the framing of it as ‘yet another killing of conservatives by antifa’ in the nether regions of the internet.

“This isn’t a guns situation… Fortunately somebody else had a gun that was shooting in the opposite direction, otherwise it wouldn’t have been as bad as it was, it would have been much worse.”

Thank god for all the guns bringing down the death toll in America then.

The Columbine High School Massacre is now no longer in the Top Ten deadliest massacres in US History.

Does he really not know what ‘at the highest level’ means…

American churches should be “arming some of the parishioners” or hiring “professional security”, Republican Ken Paxton told Fox News in an interview hours after the shootings at Sutherland Springs First Baptist Church. “It’s going to happen again.”
If more churchgoers were armed “there’s always the opportunity that the gunman will be taken out before he has the opportunity to kill very many people”, Paxton said.
The Texas governor, Greg Abbott, said on Sunday: “There are so many families who have lost family members, and it occurred in a church, in a place of worship. That’s where these people were mown down. We mourn their loss.”

Two years ago, Abbott lamented that the state’s population were not buying enough guns. “I’m EMBARRASSED: Texas #2 in nation for new gun purchases, behind CALIFORNIA. Let’s pick up the pace Texans @NRA,” he tweeted in October 2015.

It seems the real causes of this shooting are firstly that there still aren’t enough guns around among the population and secondly that they aren’t currently allowed in churches.

It’s just great to know that he’s been able to make a definitive assessment and root cause analysis based on “preliminary reports.”

It’s like they think if a shooting kills 10 people instead of 20 then that would be real progress.

What Would Jesus Do? Probs buy an AK and shoot some bad guys yeah?

Such an extraordinary level of cognitive dissonance.

Actually if there had been more people carrying giant bombs with comically long fuses,

Seems that the suspect was court-martialled in the past for assaulting his wife and child, which brought to mind this post from darwinbabe after the Vegas shooting:

I mean, you’re definitely less likely to entertain the idea of opening a conversation on gun control if you’re a corrupt cunt who’s willing to take lots of money from the NRA.

Buy a rifle, get a free copy of Scott 4?