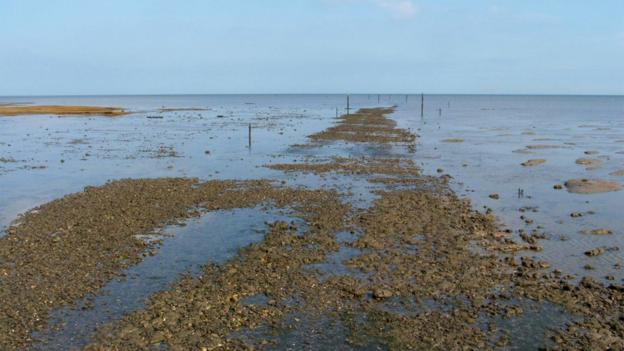 This desolate English path has killed more than 100 people

The Broomway is known as the most perilous path in Britain – and is a favourite walk of writer Robert Macfarlane, who describes it in this adaptation from his book The Old Ways.

Sounds great if you want to scare the shit out of yourself.

The Broomway is a public right of way over the foreshore at Maplin Sands off the coast of Essex, England. Most of the route is classed as a Byway Open to All Traffic, with a shorter section of bridleway. When the tide is out, it provides access to Foulness Island, and indeed was the only access to Foulness on foot, and the only access at low tide, until a road bridge was built over Havengore Creek in 1922. At least 598 years old, recorded as early as 1419, the Broomway runs for 6 miles (9.7 km) a...

I actually ended up there after noting he said ‘quicksand’ in that video and wondering about how much there is these days.

There was a whole bit on a radio show once (I think maybe Kermode?) about how Quicksand was this really ‘big’ thing in TV and film for a while, a constant bogeyman that got pulled out and then suddenly it’s just nothing.

I certainly recall one episode of Manimal involved him becoming a snake so they could pull someone out of quicksand.

Just reminds me of Neverending Story and the Swamp of Sadness

Do you mean this article? The rise and fall of quicksand.

The fourth-graders were unanimous: Quicksand doesn't scare them, not one bit. If you're a 9- or 10-year-old at the P.S. 29 elementary school in Brookl ...

I got caught in quicksand when on a beach in Essex near Mucking/Shell Haven as a kid. It only went up to my knees, but it was still pretty scary.

This may be what was being discussed but I’m sure it was on radio talking about film stuff.

Oh right. That’s such a weird stat though: 3% of all films at one point in the 60s featured quicksand.