The enemy hate the music industry 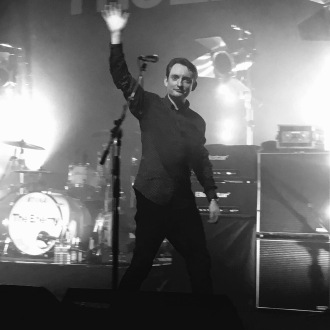 Pop has eaten itself.

The last month has been without doubt the most bittersweet of my life. All of the shows on the farewell tour were packed to the rafters with some of the best people you could ever wish to spend an …

I mean it’s easy to sit here and take pot shots but it seems a bit rich for a band whose only song i remember was a wholesale rip off of the jam to witter on about integrity. Och maybe they credited them i have no idea.

There’s also an attack on the lack of artistry or new ground being broken in music but i think he’s just looking in the wrong places.

He might have a point about artists being here today and gone tomorrow and the lack of money for artists though. Fair play.

I think there’s no doubt that the industry has changed a lot since The Enemy arrived on the scene. Forgetting for a moment whether those changes are good or bad - I’d probably feel the same way in his position…

I suppose it does say something when a band with a fan base, selling out tours etc don’t feel it’s worth continuing?

That said, I wonder if it could be a product of a band who came up too soon? They broke out on their 1st record (from memory). Perhaps if they’d spent more time in obscurity they’d have some context for the mercurial nature of the business?

The brutal truth is: they were a hype band. There’s an instant high associated with that but the comedown is brutal when the world moves on.

Although they’re not my bag, what should the band have done differently? Gone indie? Forgot about radio and found ways to communicate directly with their fan base?

Always a shame when a band people like feel pushed out of existence.

Aye, but let’s be clear about this. They were shite.

The band have done pretty well considering that fact. He should suck that up and be grateful.

Many much more deserving artists would kill for the hype and sales they were lucky enough to garner.

The points he makes are actually valid.

I’d counter it with the fact that The Enemy were elevated far, far beyond the level they ever deserved to be (they played stadium gigs FFS!). Sometimes you get lucky like that, but given how the music industry is now, releasing records off smaller labels and playing small-to-medium size venues like they did on their final tour is probably about as much as they could ever hope for. Don’t blame them for packing it in, it sounds like it’s run its course. I’ll always remember them for their bizarre series of Britpop covers on Music for the People.

Also, I can’t believe anyone goes into the music industry expecting it to be the bastion of integrity and a paragon of virtue though. Has he never read Kill Your Friends?

Have you read what he’s written? He’s literally said that about how lucky they were with their relative success

Maybe if he’d been more consistent with his line spacing then his band would’ve been better off.

So why walk away now? Well it’s an expansive question, one which I couldn’t hope to answer in a single blog post. Maybe one day there will be a book and the story can be told in full.

I can hardly wait

They were hyped up then spat out by the machine. All the lasting guitar music is supported by indies. Huge amount of bands have managed to make lots of albums. Often becoming more popular as they go along (The National is a good example). The Enemy were never going to be one of those bands. Signed to quickly before they had the experiences to develop, personally and professionally, and were always going to suffer from diminishing returns.

On another point the music industry was never about facilitating new art. It was always about money. The reason why the 60s were so creative is the execs didn’t understand the music that was selling. They just gave money to young artists to take a punt. Cause they didn’t have a clue.

Yeah I picked up on that but just thought that although he expressed that sentiment it wasn’t really borne out in the rest of what he said. If that makes sense?

Also recorded execs have been fleecing money from bands much longer then he seems to realise. These are the same companies who would sign bands then get that band to pay off any of the failure. Records labels (the major ones anyway) have always been leeches who bankrupt talented bands for the sake of it. Look at the DIY backlash against them. They were just in the past a necessary evil for most bands their monopoly has gone.

It’s true that to counter the lower amount of cash they have become much safer in ‘pop’ music taking virtually no risks with major music station promoting the same shit largely written by the same couple of writers. But this was already largely the case with the landfill indie boom in the late 00s.

We now have a very divided music industry, the incredibly narrow exclusive mainstream major record guff, and the incredibly vibrant and inclusive indie and self publishing scene where it has never been easier to find so many different styles and ideas.

Either way both suck for the type of band The Enemy are. They fit into the even more watered down and relatively niche ‘lads with guitars’ section where Reverend and the Makers reign supreme. So in the context yeah he might be right.

Yeah they were shite

I suppose the music industry’s natural reposte will be “you can’t stand me now”.

Popular indie of the aughts

Always liked them, from a distance. Remember seeing them headline Live at Leeds a few years ago, and they were brilliant. First album has its moments. Even like a couple of tracks off their last album. Respect.

Sure I’ve said before, but I remember reading an interview with them years ago where they seemed to suggest that they knew this wouldn’t last forever, they were enjoying it while it lasted, saving all their money away for a rainy day and were just having their minds blown that Oasis had invited them to open stadium shows for them. Never liked the tunes but I thought they fair play to them, that’s a good outlook.

This post seems totally polarising. Surely they saw this coming? And as josephk said they were very much a hype band. He goes on about bands being allowed to develop but was perfectly happy to take the major label deal and the big push that came with the release of their first album.

Can empathise like, they’ve obviously been shafted, but they seemed to have a good grasp on things, I wonder why they didn’t make some better choices (easy to say in hindsight, I know).

Fact is, quitting is their choice. You look at bands like… I dunno, Ash, or the Bluetones, We are Scientists even? All of them stopped selling albums a long time ago but still maintain a fanbase and live within their means as a touring band. If the Enemy have such a devoted fanbase (and clearly they do) then why not continue for the fans? Get jobs, tour, make your own money to fund your own albums? There’s a life beyond Radio 1 airplay lads.

And that’s my 2 cents

He goes on about bands being allowed to develop but was perfectly happy to take the major label deal and the big push that came with the release of their first album.

they were, what, 18? 19? at that age you aren’t going to go OH NO PLEASE MR RECORD EXEC, LET ME DEVELOP FIRST.