Anyone going to this? Will be my first time attending despite having moved to Brighton in 2015. Line up is proper good, Yves Tumor, Black Midi and Crack Cloud are particular highlights.

If anyone has been before, do you have any advice? Particularly regarding how long to arrive before a band starts because I’ve heard queues can be sizeable. 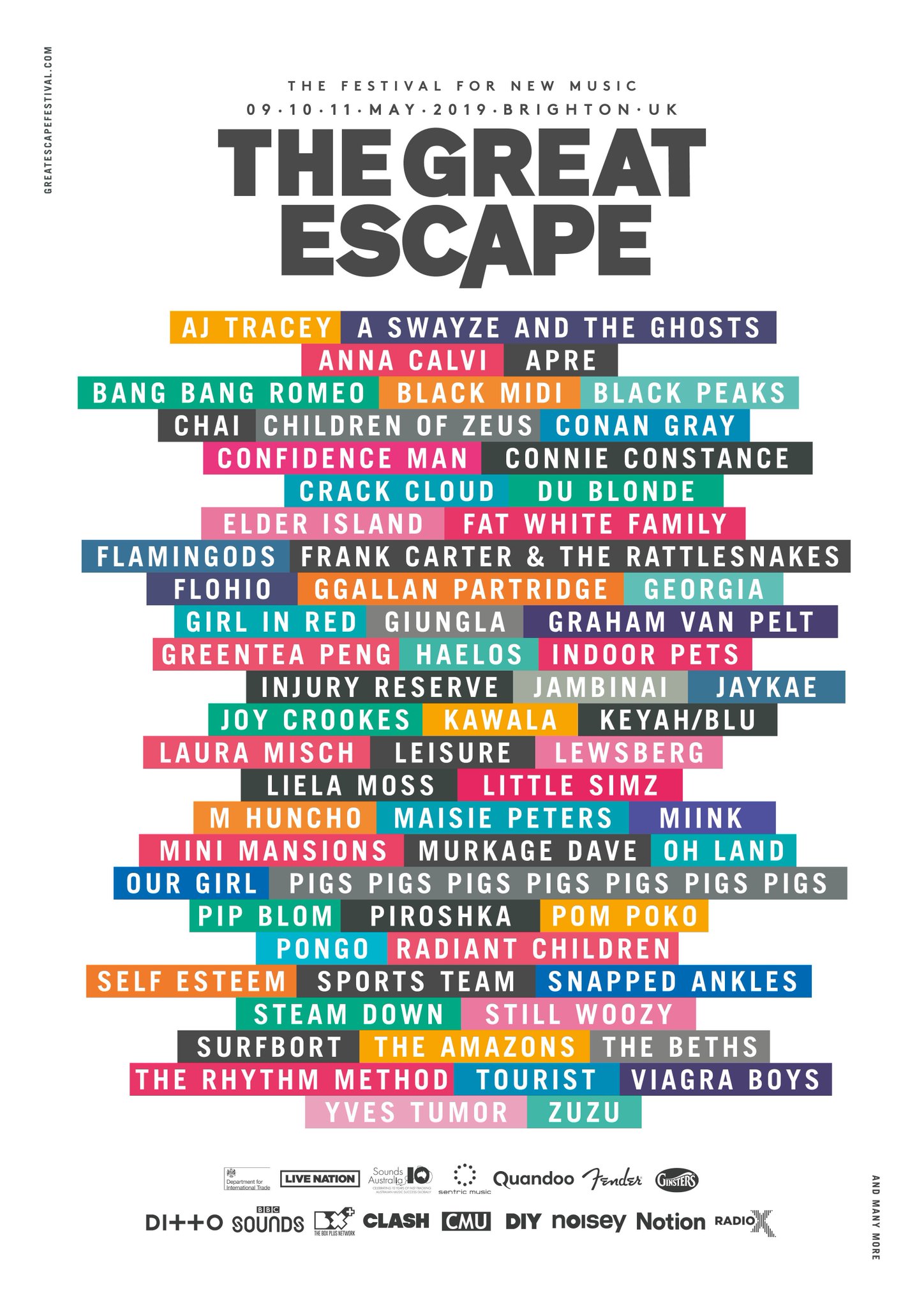 @Yesiamaduck handed down advice to me last year… I didn’t encounter many queues to be honest other than for Haley Heynderickx opening at the Unitarian Church but I was playing it safe in terms of leaving half an hour for getting from one venue to another (ignoring the one set I saw at the Old Market in Hove). I also thought the sound quality was mostly excellent and very clear across the board even while wearing ear plugs. I was turning up at different parts of the days driving from Kent so any other advice from me may be moot.

I think the line-up this year is stacked but without a lot of the middle to bigger names playing more than one set across the festival. Rosie Lowe is only playing one 20-minute set ffs I’m sure The Orielles in comparison played between three to five. I’m contemplating going on the Friday or the Saturday - sadly I can’t go on the Thursday which looks by far and away the best day.

That’s great thank you. Yeah annoyingly I’m working the Thursday until 5pm but luckily won’t be missing too much as have been fortunate with set times and acts doing multiple sets. So you reckon If I try to be at each venue about 30mins before the gig starts I’ll be alright?

I will give you more advice later but i recomme dgoing straight to the seafront after work on thursday for the run of chai, little simz and confidence man.

Last year they introduces that arena and its fantastic, has helped reduce the queues as well. The queues arent usually much of a problem until the late escape acts and for the hands on between 3 to 5pm. Generally speaking its best to go on gut feeling, i personally like choosing one or two venues afternoon amd 1 or 2 venues at night to remove anxiety and go for the stages with the best overall line ups

wicked, thanks a lot. In terms of who I wanna see I’m pretty covered although any recommendations are always welcome, especially for lesser known acts. I assume by Late Escape you mean post 7pm? There’s clashes all over the place so I think best thing to do is just set up shop in one venue for the late night sets like you advised. Thankfully I live very centrally which will help.

Can’t wait to see Black Midi, Pigs x1111, Little Simz, Georgia and Flohio. Yves Tumor was terrible when I saw him earlier in the year so I’m avoiding it, and didn’t really enjoy Fat White Family either.

Jambinai - a sort of Korean post-rock with folk influences - are really worth a look btw.

Ahh that’s sad to hear about Yves. Safe In The Hands Of Love was one of my very favrouties from last year but I can imagine its tricky to translate across to a live show. I’ll still be there I reckon, especially seeing as Jockstrap are on before. Fat Whites are a tricky one, seen them many times and they’re often electrifying but sometimes its a right mess. Again I think I’ll be there just because the run of bands before them is so good and get to hear some new tunes I imagine.

Sound for the heads up on Jambinai. Gonna have to miss Pigs x7, Alexandra Streliski, Leifur James and more through clashes which is grim. I’m in the process of making highlighting my clashfinder and might post it in here later as a way of recommendations if anyone is interested.

Oh good, I’d been meaning to create a thread about this as I’m going this year, but never been before. I only knew a few bands beforehand but have had a listen through the 400+ bands (that some other random person had helpfully added into a Spotify playlist) to find the 100 or so bands I liked, and then whittling it down to the 35 or so bands I liked enough to see (excluding the clashes). I’m hoping to jump from venue to venue, and have had an attempt to see which ones are possible via the map on the app, but will see how that goes. I will have to have a look for the clashfinder, as I’ve been away from my computer and so have been doing handwritten plans instead (see below!), but still more finalising to do… I’ve found plenty of new bands that I hadn’t heard of before - quite looking forward to it now!

With regards to darting around, I dunno how familiar you are with Brighton but everwhere is very close together, The Old Market is probably the sole exception but there’s tonnes of buses that go down that part of town every couple of mins. It can be a little bit of a maze here though, especially down by where East Street Tap etc are in The Lanes

I’ve only been there once, just over a year ago, so at least have some sort of vague idea as to how big it (possibly) is. My next stage of planning will be to properly see how far away venues are from each other, and then see how that affects how much jumping about I do between acts. And then whatever happens on the day!

most are in the centre of town. Generally either on the sea front or The Lanes and North Laine area. All of these are about a 15 min walk from each other at most. You can walk from the Train Station, where Green Door Store and Prince Albert are, to the clubs on the beach in about 20 mins.

The Old Market and Concorde 2 are a little trek away but really not too far.

Late escape is the post 11pm acts and the electronic focused line ups. These can get full very quickly as only 3 or 4 venues are open this late. You have access to this sister festival as well but people can also buy tickets seperately

Horatios is always a fantastic venue during great escape. Think its because there is lots of space and they cant over fill the venue and theu have the outdoor bit with plenty of room and space but something aboit that venue means there is always an amazing friendly atmosphere

Sallis benny theatre is also great
Nice large and spacious,.never over crowded and very cheap bar (2 pounds for a can).

If your hungover the queens hotel is great

Try to go to the deep blue, that whole arena has street food and loads of deckchairs and really good tent based stages

Get the app, its really good for planning

Remember to pick up your free program at wristband exchange

The beach site is near Concorde 2 so thats also quite far away but there are 2 stages there, I also think Concorde 2 is being used for the spotlight shows this year so if you haven’t got a pass for those shows you wont be going there.

There is also ‘The Alternative Escape’ the schedule for that festival is included in your great escape program. That uses a lot of the pubs and cafes in town (this festival is free for anyone - no wristband needed)

Oh is it?! I thought it was closer to the pier. Saw a bar on the beach when I was leaving the Hot Chip gig and wondered if that was for TGE so I guess it must be there.

Its inbetween the pier and concorde

I echo Horatios being great - loads of room, good sound quality too. Orielles were great in there, I think Big Jeff from Bristol was there as well!? And yeah the beach stages/tents are really close of Concorde 2 - that’s one area I would says maybe try and stay around unless you’re planning on seeing acts on the other side of the seafront.

Plus you’re watching music in a pub at the pier! The novelty never grows old for me##

Big Jeff does do Great Escape

Only about a week to go. I’ve almost got a plan - I’ve been very harsh listening to the bands via the Great Escape website, giving each a minute or less to impress me.

A lot of good advice up the thread. Get there early if you really want to see a band, don’t overlook the Alt escape stuff, and have a plan B as well - if you can’t get into a gig you want to go to there might be another without a queue just round the corner.

Last year I completely failed to meet up with @grievoustim . Anyone else want to have good intentions for meeting up this year that seem more and more remote as the weekend goes on? I reckon the best bet might be to meet up for brunch before the bands kick off, if anyone fancies that.

If anyone has a spare Friday ticket going, let me know please. I got seduced by DICE into going to see Ross from Friends at EartH the next day so I don’t want to waste money on a Friday + Saturday ticket.