The Hitch-Hikers Guide To The Galaxy

The radio series (1978 onwards) and the television series (1981). Just utterly sublime entertainment, philosophy even. I love it. Spent the evening with the 1981 Blu Ray. Off the scale brilliant. BRILLIANT. I think the OG radio was best, but, so damn good. 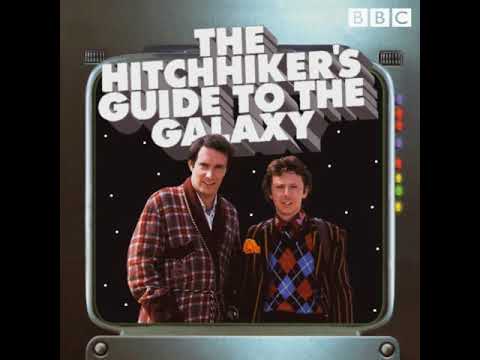 +1 for loving it. Always wanted to be Zaphod Beeblebrox when I grew up, but turned out to be Arthur Dent instead.

I’ve got the radio show queued up as my next audiobook adventure you know! What a coincidence

Really glad to see some love for the TV series cos that’s what my Dad got me hooked on when I was little and I do remember having seen, in the past, some rubbishing of it for not being as good as the radio but I bloody loved it. Great TV.

Big hand for the great prophet Zarquon everybody:

Last Chance to See was great too

You guys are so un-hip, it’s a wonder your bums don’t fall off.

Still use this 30 years after first hearing it.

Just the other day I was thinking about a creature so stupid it thinks that if it can’t see you, you can’t see it!

Big fan of the first couple of books. The sort of thing that’s still funny even when you know exactly what’s coming. Vaguely remember watching the series as a kid but never heard the radio version.

Often think of ‘tasted almost, but not quite, entirely unlike tea’ for bad versions of any food item.

And of course, ‘the ships hung in the air in much the same way bricks don’t’ is just brilliant nonsense but you know exactly what it means.

One of my very favourite characters is Wowbagger the Infinitely Prolonged, ‘you’re a jerk, Dent!’ always makes me laugh.

was the SEP field (someone else’s problem) a hitchhhikers guide or a discworld thing? you know, that thing where if something looks so ridiculously out of place that no one can see it? anyway i think about that a lot

Read the books when I was at uni and loved them all. Keep meaning to go back and re-read them.

The TV and radio series are both brilliant. Was a bit disappointed by the film.

Had a good recipe for a Pan-Galactic Gargle Blaster in a cocktail book somewhere as well. Looked just like the one in the TV series.

Repeatedly watched the 80s series as my dad taped it onto VHS. I think even then the FX were a bit shonky, so it would be interesting to watch again. Never heard the original series.

I loved the books, as the clever wordplay was great. However, I am not sure as they got worse as each one progressed, or the humour started wearing a little thin/samey?

I have the same problem with Pratchett. I’ve read maybe 10 or so, and loved many…but I picked up a recent one a while ago and gave up half way through. Just seemed like ‘oh, we’re doing that schtick again’

The recent film was so slated I don’t even know whether it’s worth watching out of curiosity.

Recent = 2005! I thought the film wasn’t terrible, nothing special but not as bad as people would have you believe.

Read the books and watched the film but never checked out the radio or TV series, must give them a go some day.

I saw the stage play about 10 years ago, with the origional cast and it was so much fun. Terry Jones was doing the voice of the Guide which was brilliant.
Love the TV show, love the radio show but usually forget how depressing it is and quite like the film, it’s much better than people make out.

Oh, I got thrown out of a free class in school because I was laughing too much while reading the book.

Vogon poetry is of course, the third worst in the universe.
The second worst is that of the Azgoths of Kria. During a recitation by their poet master Grunthos the Flatulent of his poem “Ode to a Small Lump of Green Putty I Found in My Armpit One Midsummer Morning” four of his audience died of internal haemorrhaging and the president of the Mid-Galactic Arts Nobbling Council survived by gnawing one of his own legs off. Grunthos was reported to have been “disappointed” by the poem’s reception, and was about to embark on a reading of his 12-book epic entitled “My Favourite Bathtime Gurgles” when his own major intestine, in a desperate attempt to save humanity, leapt straight up through his neck and throttled his brain.

Those last ten words, a perfect use of language and efficient hilarity. Funny before you even know what’s hit you.

TV series stands up incredibly well in my eyes, shonky as some of it looks (Zaphod’s second head…)