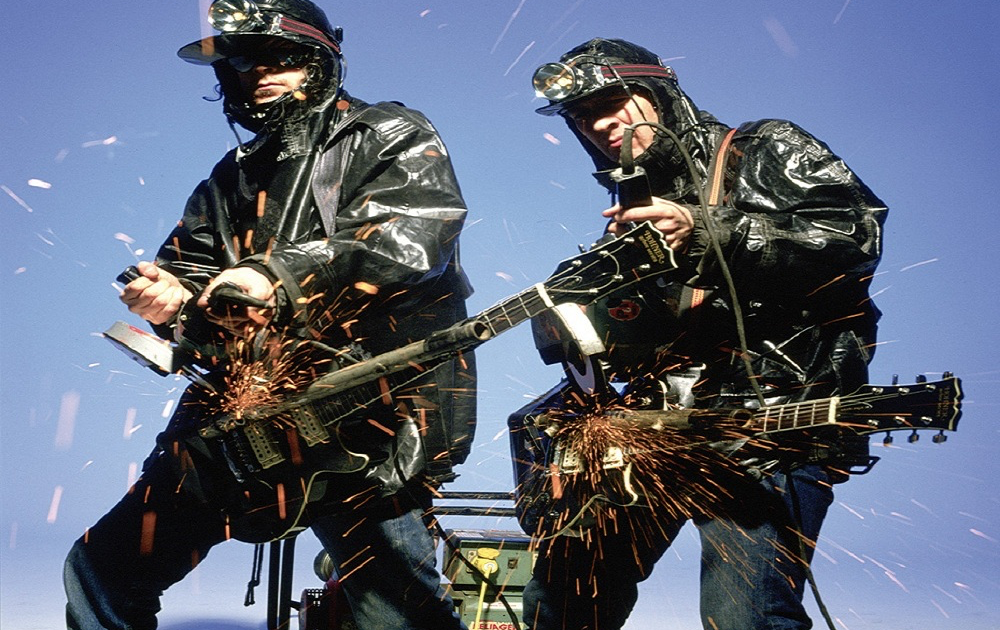 Influential electronic pranksters The KLF release a bizarre video hinting at a return in 2017 - the duo's 30th anniversary.

Are they anything more than a joke band? No one actually talks about their music,it’s mostly just talk about them burning money or something

It is really good

Much more than a joke band, you’ll never get this at the Brits again, the ultimate up yours to the music establishment.

Take one of your popular tunes and turn it into hardcore noise.

It is, but The White Room is stuffed full of CHOONS.

Bill Drummond’s musical background is worth checking out, having been musician, manager and A & R man during the late 70s and early to mid 80s.

Big in Japan, Drummond is in black on the left. The guitarist next to him is a young Holly Johnson whilst the singer is a young Ian Broudie later of the Lightning Seeds. One of the drummers behind is Budgie later of Siouxsie & the Banshees.

Wonderful song that spent a week at number 71 I think.

During the early 1980s he managed Teardrop Explodes, Strawberry Switchblade and Brilliant, for the latter see
http://www.youtube.com/watch?v=fLu2vgayA_c

A cynical attempt at pop stardom whose musicians were Youth (ex-Killing Joke) and Jimmy Cauty (Later the other half of KLF) and producers were the then unknown Stock, Aitken & Waterman. Music press hated them and they bombed.

Not long after Cauty and Drummond began fiddling around with sampling.
http://www.youtube.com/watch?v=S4OF0Fnq0UM
All done illegally, until they had a run in with Abba.

predicted this on the old boards. cause the k foundation moratorium only lasts til this year

They’re not a joke band.

Glorious mess of a sample-laden debut album as The JAMs
The ABBA story with the trip to Sweden
The Manual and their first number 1 as The Timelords
The Pure Trance series, including the legendary What Time Is Love?
Kylie Said To Jason
Ambient masterpiece Chill Out, Space and Jimmy Cauty’s role in The Orb
The Stadium House trilogy
It’s Grim Up North
The White Room
That Brits performance
Retirement from the music industry and deleting their entire back catalogue the same day
Burning a million quid

It’s about as punk as you can get.

One of those bands I nod politely about when they’re mentioned but I haven’t the foggiest idea who they are or any of their music or why I should care.

Something about the brits

Innit. When they were around I loved them, but only looking back see fully what they did. Perhaps the worst thing they could have done was burning that money as it is the thing that defines them.

I have about 3/4 of their back catalogue on vinyl and it’s treasured.

In a moment of madness I threw away my original KLF shirts as well… Though you can get bootleg versions these days.

I despise Bill Drummond and everything he’s ever done.

YES. There’s an argument to be made that they’re actually the greatest band of all time. Also, Justified and Ancient is an absolute tune.

Really feel like you had to be there for these guys. I was too young to really remember them. The dance pop stuff sounds a little naff, though I can imagine someone like Bicep getting away with dropping Last Train to Trancentral and making it work. Chill Out is obviously a seminal ambient record but they seem a strange curiosity to me - mainly for having been genuinely big for a short period of time but also for having a cult following they do among people that don’t really listen to dance music.

Read the John Higgs book about them last year and it was brilliant, full of mad stories. Always remember seeing them on Top of the Pops with giant ice creams playing guitars and a rapper in an ice-cream van

Great band - absolutely love The White Room album.
They were the biggest band in the UK for a while in the early 90s.
Always liked this remix -

I’d be absolutely made up if they did return but this story is pure balls isn’t it? It’s just the film from the John Higgs KLF night at the Cube back in 2015, that was also shown at Supernormal last year and possible at some other events, and nothing directly related to Bill and Jimmy.