The logistics of smashing a guitar as part of the set

Trail of dead used to do this all the time. Their tour manager was always yelling at them about it apaz

Didn’t Matt Bellamy once smash the wrong guitar, putting him right off the idea of smashing further guitars?

When they played the Windmill in Brixton (cap. about 150 people), they still brought along a full rack of guitars, like they were Sonic Youth or something. It was too big to fit on stage, so had to stand on the floor, next to the sound desk.

yeah there’s a great bit in the world’s apart documentary where he’s yelling at them about not having the WEREWITHAL to replace guitars and drums every night and they put the dictionary definition of werewithal up on the screen.

Ability to do what, though?

the dictionary definition of werewithal

the means that only appear under a full moon

Yeah, I worded that a bit badly, I mean literally the same one each time which is why I was wondering how easy it was to repair a guitar over and over if that was the case!

Trail of dead used to do this all the time. Their tour manager was always yelling at them about it apaz

I loved how the first time we saw them at the Astoria in 2001 they threw a guitar and the whole drum kit into the audience at the end. A year later they tried the same trick and the management were waiting so this wall of bouncers just came up on stage and grabbed it all before they could

Unrolling a leather pouch containing a set of micro screwdrivers, and just knolling everything out on a tabletop.

Have two very different, bolt on neck guitars and use almost the entire set to remove the necks and swap them before starting in on a cover of Freebird with them.

OR repair a smashed up guitar on stage, standing there holding two pieces of wood together as the superglue dries.

This is a brighter future for rock

Like that episode of James May’s show in reverse

Worlds apart was the first time I saw them, supporting audioslave lol. Think they still smashed the guitars and drums despite being the support band. Dunno why they ever signed up to that tour tbh.

Still, at least they got inspiration for a song out of it. 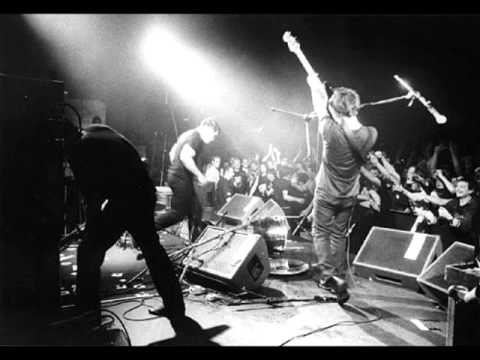 Get up a YouTube tutorial on my phone, run it through a delay pedal

I dunno, just wondered if there was a ‘type’