Not to be confused with the unofficial one that doesn’t exist.

This should be simple enough but here is what I’m thinking:

Albums will be added to this playlist: 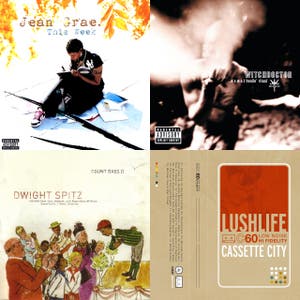 I’ll kick this off with this release from 1998. Witchdoctor is part of the Dungeon Family. Album is almost entirely produced by Organized Noize when they were near their prime.

That album isn’t on UK Spotify…

Some great beats (7th Floor/The Serengetti is soulful af, that bassline on Holiday/12 Scanner is fucking addictive, love how squelchy Georgia Plains sounds) but I can’t get past the fact that none of the MCs seem to be anywhere near the pocket for the most part. There always seems to be a disconnect between beat and MC when I listen to the non-heavy hitter southern stuff that I struggle with. I’d liken it to how, to me, Morrissey always sounds like he’s just laid down his vocals without even listening to the track he’s singing on and I find it viscerally irritating. This didn’t irritate me in the slightest but I did find myself zoning out after 2/3s of it or so.

Will dive back in and give it another go though for sure, like I said some fucking great beats on this.

So, I’ve got an enormous blank spot with southern stuff so this is a great first week choice from my point of view

Samesies. Just banging it on now.

Dunno if it’s just the UK, but Spotify seems so patchy for hip hop. First 3 things I thought of for possible things to contribute aren’t on there.

It seems to be really bad for stuff just disappearing off there, sample issues presumably but Little Brother - The Listening and El-P - I’ll Sleep When You’re Dead are both big favourites that have just vanished from there recently that were up initially.

Yeah, I assumed it was samples too. But I saw Organised Konfusion Stress got some deluxe reissue, so thought I’d give it a listen and it wasn’t on there.

First thoughts - pleasantly surprised by how gritty the production is. That haunting piano twinkle on the second track is straight out the RZA cookbook in terms of pushing my hip-hop buttons.

Basically this. Like you say, lots of these beats are top drawer but the rapping just doesn’t flow for me. Maybe it’s just underexposure to the style. I’ve never really clicked with Outkast either so may just be a lost cause…

This is great - just signed up to DiS to take part. Also amazing timing cos I watched The Art Of Organized Noize on Netflix last night (was really good).

Remember this one from when it came out, but haven’t listened to it for years until now. Agree with Ant and Aphex in that the beats are amazing - absolute prime time Organized Noize (they would have come from the same period as the beats on Aquemini and Still Standing) - but Witchdoctor isn’t anywhere near the level of the Outkast or Goodie Mob guys. Don’t necessarily think its a Southern style thing - just think unfortunately Witchdoctor isn’t as good as his Dungeon family bros (the guest spots really stand out IMO, but there’s certainly not top draw rapping from them on this record either).

Still enjoyed it overall tho’. Will give it a few more spins this week and pick out favorite tracks

This is really good. Flags a little toward the end (Smooth Shit could have been omitted). Gonna give this a few more listens this week. Echo the comments about the rapping being average, but I can totally live with that if the production is great (see also: Group Home).

That album isn’t on UK Spotify…

Bummer. However, I forgot to add to my initial list but definitely don’t feel like you have to make a recommendation based on whether or not it’s streamable on the usual platforms. The spotify list is just for convenience but we all know how to get stuff that isnt on there. So if you have a rec that’s way out of print and/or not streamable or findable then we may have to provide links but for the most part we all know how to at these albums. If it’s a mixtape on Datpiff or wherever then let’s provide links for those.

The drum programming on this album is as good as it gets, I really think that’s where Organized Noise shine. They create a fully immersive atmosphere with some eery sounds that set the stage but then the drums put it on another level. The Holiday/12 Scanner beat is one of my favoirte ON productions for sure. That vocal “hmmmmmmmm” that is the bed for everything else on top is perfectly used. Then that bass of course (actual guitar bass and not a synth). The snare and kick are basic but sound perfect, but it’s the rolling 808 snares that offset the natural drum sounds. There’s a weird wacka wacka sound going on that phases from left to right. Sprinkle in some light guitar texture, a bell, a little piano riff, and you have a beat that packs an enormous amount of depth. You really just don’t hear stuff with this amount of detail any more (they were pretty out of this world in there time too, though).

This is an album that unfolds over time. There’s layers to it.

The Ritual and Dez Only 1 are a couple of my favorites!