In other news Jeremy Corbyn to headline Glastonbury next year

£1.5bn for Northern Ireland in the deal. Turns out there was a magic money tree after all

i assume it was rubbish

Fucking hell, it’s absolutely insane that they can do this.

Was about to post this as “The DUP Deal of Doom Edition” of the politics thread, but a politics bar is also good.

[quote]The deal is done. May’s agreed to a £1bn bung over two years to get the votes of the DUP on major matters. Other matters:

So in other words, the DUP have actually killed the only worthwhile policy (double lock) in the Conservative manifesto. Well done them.[/quote]

‘played down reports that it had sought £2bn’ (BBC)

Do we know how much it is?

more than £1bn over two years

Pretty strong school of thought that May shot her bolt with all the DUP nonsense and that she shouldn’t have gotten straight in with all of the ‘getting a deal’ nonsense. The DUP were never going to let a minority Lab coalition helmed by Corbyn in so… should’ve just held firm and not blasted away concessions early on.

Another thing that points to the embarrassment of talent we’ll have around the table in the EU negotiations.

Guess it’s a hell of a lot, whatever the actual figure is.

Does this endanger the funding of future NHS bus adverts?

NHS bus adverts will be replaced with adverts promoting the teaching of creationism.

For a 2 seat majority. Unbelievable. Corbyn needs to go in hard about this.

IT'S YOUR DECISION, DANIEL

@ItsJohnRain
"Greetings! How nice it is to see you" "Wicked child!!! Don't lie! Everyone hates us, and you know it" https://t.co/uRpxO1v1oJ 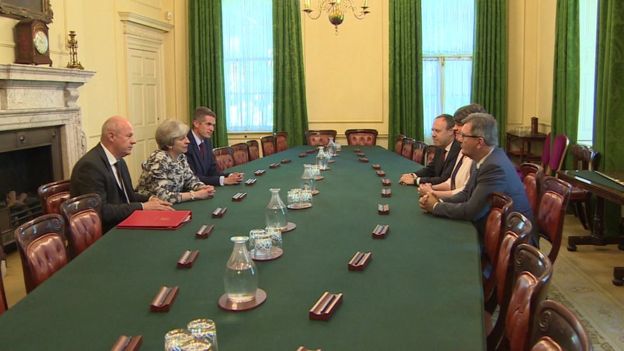 In London we already have those adverts.

“We did have a cabinet meeting this morning didn’t we? I was sure!”
“Erm yes. I think Jeremy said he was feeling a bit ‘fluey’ and Boris has a problem with his boiler, and Gove said he had to take his dog to the vets…”

So the going rate for a vote to support the government is £100m per mp then.

I’d be taking this sorry lot to the cleaners regardless as well, tbf.

Where’s it being spent?

If any significant amount’s going on the NHS that’s the Tory and supporters’ claims that they’re not damaging the NHS out the window.