The Rolling Doctor Who Thread

Was 3 the hotel planet one?

That really annoyed me because they blew the concept massively. Actually quite scary looking ‘aliens’ but they just stood there roaring. Where was the threat??

Yeah that’s the one. It was so odd.

Great look to it, cool alien, good twist and smart way out of the oxygen situation but so many weird moments.

The Doctor taking 12 people into a war zone to look for a guy who is blatantly dead? Everyone sacrificing themselves for no real reason? Weird mother daughter thing? Super kid mechanic?

Edited weirdly too. Aliens barely in the same shot as the Doctor’s crew and no threat level. My wife and I both commented on how they seemed like they were filmed at a separate time?! Bit of a waste.

(Good to see you the other night!)

Terrible green wig on lad from Inbetweeners and his mini me though. 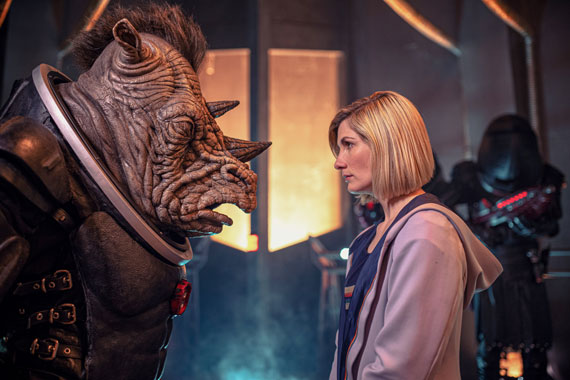 Orphan-55, episode 3, was definitely not good. Just such a boring over-used concept in Who, the apparently idyllic place that’s actually really evil. We get one a series in Nu Who it feels like. And the bad guy is corporate although here she isn’t really so that doesn’t work.

The very very obvious ANVIL OF SOCIAL COMMENTARY dropped upon us, not to mention supporting characters who were dull because normally these episodes are lifted up by some good character stuff.

I totally hear you. I rolled my eyes at the trailer for it. They do tend to do it a lot, but it had a bit of an Earthshock vibe to it once they got out into a good old quarry, so I probably cut it some slack for that.

Anyone know how to get a Doctor Who episode idea submitted? I’ve written an outline of a few and wondered if the public could submit ideas… Presume the lead writer commission’s people, but hey… Don’t ask, don’t get!

So I know someone who knows a guy who is in the production team or something.

At a guess the tiny numbers of episodes and the small pool they’ve always taken from it’s not something that’s easy to break into.

The old claim in US TV (which you’ve probably heard) was that you write a script for a TV show that’s very unlike the one you want to write for and send it in, e.g. you’d write a script for ER if you were trying to get the chance to write for Star Trek. I believe this is all about the issue of story rights: if you write something that happens to be like another script in production it’s a big issue for them trying to prove to you they didn’t just rip your idea off.

(Seem to recall JMS had to abruptly leave the B5 bulletin board or something after someone posted a story idea that was basically his Passing Through Gethsemane one, which resulted in that story being held back until S4 when any possibly legal issues were removed.)

EEEEnyway, I had a look at Big Finish and they say no unsolicited scripts but they do have competitions for entries fairly regularly it seems, e.g. this one from last year:

If you’re serious about ideas you might need to speak to a script agent (I’m guessing such a thing exists) but likely people don’t want story outlines, they want full scripts.

You could just go into the online fanfiction community and start turning your ideas into stories. Seems like going from fanfiction to actual paid work is a thing…

Had 3 or 4 ideas for episodes kicking around now for years in my head. Feel like I ought to try to show them to someone! None of them feature the big monsters, but I think could be a bit different from the norm.

I think @ericVI is the only guy I know of in the industry to any degree so he might know how you move from having some good script ideas to doing something with them?

I would guess learning how to write scripts is next up but I am not someone who can imagine making scripts out of my ideas.

The two other avenues I guess I can see this sort of thing being applied are:

There is a Doctor Who one:
https://www.cubicle7games.com/our-games/doctor-who-rpg/
but no idea if they sell modules and even if it’s particularly popular.

The old claim in US TV (which you’ve probably heard) was that you write a script for a TV show that’s very unlike the one you want to write for and send it in, e.g. you’d write a script for ER if you were trying to get the chance to write for Star Trek. I believe this is all about the issue of story rights: if you write something that happens to be like another script in production it’s a big issue for them trying to prove to you they didn’t just rip your idea off.

That was the best episode of Who in a good while

Quite enjoyed this weeks, but the lack of grieving/even acknowledging some of the deaths (ie bird beach guy) did my head in.

Only saw a bit of that but that stuff growing out of people triggered phobias I wasnt even aware I had.

So I’ve loved the last two. I’ve always felt the Cybermen are the most scary, evil foe if you imagine what it’d be like to have your friends and family erased but still alive.

Think these two have both looked amazing and set up a big finale. No idea if it’ll live up to it, but it’s nice to have the room and breathing space for the tension to be more drawn out. 3 part story has helped.

Good episode.
Still not entirely sure what was going on with the scenes set in Ireland.
Were they implying that the Cybermen are of Irish origin?
Doctor Who - at it again?

I had no idea either. Parked that as I presumed it’d get fleshed out next week.

I enjoyed the episode but it was also baffling and full of bad stuff.

Why aren’t the Cybermen making new Cybermen out of humans? This seems stupid to ignore their main feature as bad guys.

Why do we yet again have to have some random characters killed off just to ‘show the danger’ and then no one gives a shit, not even the guy’s brother? We KNOW the danger of Cybermen anyway.

Why is the TARDIS unavailable? Like it lands far away but they’re all fully prepared for what they’re going to find. The spaceship the humans has doesn’t work and then suddenly it does. But the Doctor’s been letting everyone in the TARDIS so just fly the bloody thing to the TARDIS?

Why when the Doctor steals a space ship doesn’t she fly to the TARDIS? This is characters serving a story stuff.

Why is there a whole army of Cybermen that no one turned on? They suffered their greatest defeat there because someone just ignored a whole carrier full of death? REALLY?! And in fact the whole ship seemed in perfectly good health.

Why, when opening the first Cyberman cask, do the main Cyberman and his lieutenants make them scream doing something to them, then the next shot they just open a whole load of the guys and set them off? This is like some peculiar non-sequitur of actions, like two different plot ideas in the same episode.

Overall it was fast enough that it kept me occupied but at the end when the Master came along I guess I was meant to go, “Oh wow,” but instead I just felt like, “Oh yeah, bring on ANOTHER inexplicable thing, why not? Just pile them on!”

I struggled with almost all of that too tbf. One minute it’s the last few humans and Cybermen around, next minute there’s a giant cruiser of them.