The Sims (a thread for a future gaming board)

Currently on a 77 week game on Sims 3 for PlayStation with at least 6 generations so far. My favourite thing is Sims having kids with people who don’t live with them and then following them and their ancestors from afar and having a mental family tree of them. Inviting them to all the family parties, that kind of thing.

I’ve never really played it on computer - just PlayStation 3 and GameCube. I would honestly love a dedicated PC for playing Sims on (my MacBook can barely store the latest OS update) but it would be an expensive decision…

I’m trying to grow an Omni plant but it takes so fecking long for the opportunities to come through, I’ve stuck lifespans onto epic and yet my Sim went from young adult when getting the cheese plant opportunity to old woman by the time the steak and patty plant opportunity came along. Still yet to find a rainbow beetle as well although once I found one rainbow butterfly I started finding them everywhere. Got my first plutonium the other day

My favourite computer generated Sim was a burglar called Krystal. She wore a zebra print halterneck jumpsuit and I had to have her be a part of the family. She always wanted to make her children evil. Huge fan.

Genuine question as someone who played the original Sims on PS2 and PC - what keeps you going back to it? I found when I played it after a few days there wasn’t really anything to do.

I’m one of the weird people that didn’t use cheats.

I just liked progressing my career and improving my house steadily. Now thats my actual life though the game doesn’t appeal as much.

Actually my real life career never progresses so maybe I should play it again.

Can’t trust myself with it, too many memories of starting in the morning and then looking up and night has fallen, it’s dinner time. Afraid I’ll start a game tomorrow, look up and I’ll have been retired for 3 years.

don’t play it myself, but my daughter is fully into it, so I’m going to harvest this thread for snippets to drop into conversation and make myself look good, okay?

I absolutely loved The Sims back in 1999 (?) when it first came out. Not long after though, I threw the CD-Rom in the bin as I’d spent an entire weekend playing the game and not looked after myself.

My fiancée plays it a lot. She uses my macbook Pro because it’s well decent, but the HD is around half full of her expansion packs now.

I don’t really know much about what’s going on in her game, but she was annoyed last night that her child had been taken away. Seems good fun.

She plays that while I’m on Cities Skylines on the PS4 with an album on. Good times.

Fun fact: For years I worked alongside one of the lead developers for the original Sims game in a small company, and he was a really great guy. Found this quote about one of his contributions to the game:

When The Sims first launched in 2000, developer EA Maxis hardly expected that the title would make any major waves. So, when months before the lead engineer went into the game’s code and – without consulting anyone – programmed in the possibility for same-sex relationships, no one at Maxis really batted an eye.

Great screenshots on work on the original game here

So apparently in March of 2000, one of The Sims' programmers (Jamie Doornbos) published some info about how The Sims developed over the years, including this screenshot of Project X from around 1995. Wow! https://t.co/0CNapaA6Ho 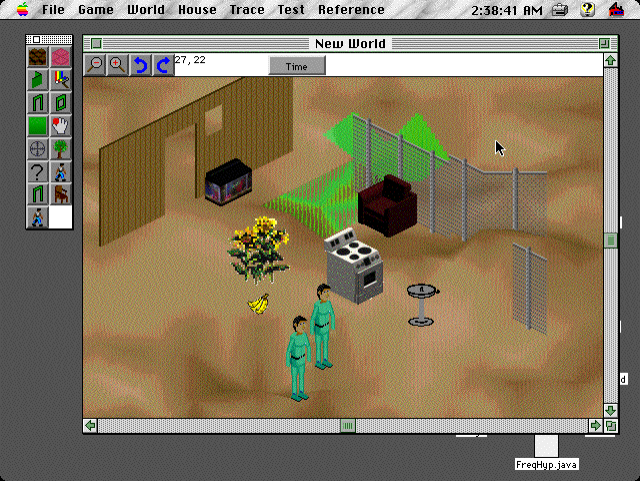 I just love having total control over people to live out their lives and have lovely houses laid out how I want, changing up the decor and items every so often, hanging out with game Sims and fulfilling needs. It’s really relaxing!

I’ve never been one for murdering my Sims, even when I’m really fed up of them and their narrative has ended and they’re just clogging up space in the house (you can only have 6 Sims in a house on PlayStation which is really limiting, they can’t go and live in another house so you have to keep them or kick them out and then they kind of disappear into the abyss).

Listened to quite a moving Reply All about The Sims a while back:

A 13-year-old girl builds a tiny world that she has complete, perfect control over. And then one day, that world forces her to make an impossible decision.

“The game where you feed, wash and exercise your imaginary people while doing none of those things yourself”

I think I’ve played every version from the first through to 4, although I could be wrong. Stopped when I switched laptops a few years back.

I too was quite into marathon sessions. Creating my own family was an achievement, although I never really played with them much. After about the second version I found the game was just too big and complex; my natural inclination was always to generate a very stable and boring family, albeit sometimes quite a non-standard mix. I can’t remember ever letting any of my Sims die, I just couldn’t bring myself to let it happen.

Basically saying I lack the imagination and the application to do this game justice. Have moved onto other more basic timewasting games.

My youngest pestered my to allow him to play the Sims. He’s 8. I signed up for a microsoft account (I think) and it cost me £20 for a year. Obviously immediately he got bored and hasn’t really played it more than once… Is it a bit advanced for an 8 year old? I’ve never played it but did get some advice saying it was ok for kids to play (in terms of content)…

This reminds me of something important. My niece absolutely adored playing the Sims on my computer when she was small. You could tell it was the number one thing she was looking forward to doing when she came to visit. Absolutely fascinating watching her doing it, from a digital native four-year old happily carpetting the lawn, through to a slightly weird ten year-old spending hours constructing endless seemingly identikit Stepford twin girls and not actually entering the game at all.

My little boy (8) plays it and loves it, although it is slightly alarming seeing the things he creates.

Apologies for the potentially offensive term used - too late to edit. Obviously no offense was intended, was a Wayne’s World reference (along with the rest of my life).