Fascinating that the perception of them is as a failure - that the record didn’t cross over like it should have, that they didn’t come back with the right things at the right time etc. I remember as a kid they were all we ever heard about.

yeah, a fairly odd tone. “If you ask me, ‘Is This It’ is my album of the decade!” Not exactly a hot take there…

I think there’s maybe a sense of failure to the degree that they more or less ended up like all the other acts they set the stage for where it was all diminishing returns after the debut.

I think there’s maybe a sense of failure to the degree that they more or less ended up like all the other acts they set the stage for where it was all diminishing returns after the debut.

I think this is it. The Strokes’ massive success and ubiquity was only for a couple of years, and perhaps the feeling is that the second record didn’t kick the band on and make them more popular. This was possibly why it’s felt that this was a missed opportunity, rightly or wrongly.

I cant remember that clearly myself what their popularity was like around Room on Fire. Still quite big from what I recall. Does anyone remember the band playing arenas at this time?

The article seems to indicate that the record was received well enough but they had no vision or particular desire to promote it - and that they actively bucked things that could have taken them to the next level. I personally prefer it to the first - but it’s inarguably just another half hour of lo-fi garage rock.

Agree with whoever said that it’s not much to hang a world-conquering career on.

Well there was DEFINITELY an arena tour for their third album, so there probably was for the second too. Someone mentioned a T In The Park headline set circa Room In Fire so, yeah, I believe they were still pretty big.

12:51 and Reptilia felt inescapable, in the best possible way.

I think this is it.

this piece is an extract from a book btw. this is the book: Meet Me In the Bathroom by Lizzy Goodman. A fascinating and vibrant oral history that charts New York’s explosive musical transformation in the early 2000s.

i could see that coming!

this is weirdly excellent

always loved this one. also weird as.

I really like Comedown Machine - I think the lead single put everyone off and coming off the back of Angles didn’t help either.

That song is wonderfully weird it almost sounds like Ulrich Schnauss remixing The Strokes or something.

Like how Ryan Adams keeps cropping up & contradicting himself in that article, like Rick James “Cocaine is a hell of a drug!”

Been listening to Comedown Machine a lot recently. Sounds way better than I remember. The recent EP was good as well. Would love a new album, but after reading that interview I doubt it will happen any time soon

I cant remember that clearly myself what their popularity was like around Room on Fire. Still quite big from what I recall. Does anyone remember the band playing arenas at this time?

don’t know what the shows were like but they were still pretty big, most people i knew at school definitely knew 12:51 and Reptilia

yeah, it’s coming back to me a little…i forgot about those songs really!

i think it may be the case that the second album did less well in the usa, rather than over here…which is part of the reason they consider it a ‘failure’.

but that kinda shit is just lazy journalism right? i love em but of course its bullshit. doesnt mean anything.

New Voidz album on the way… 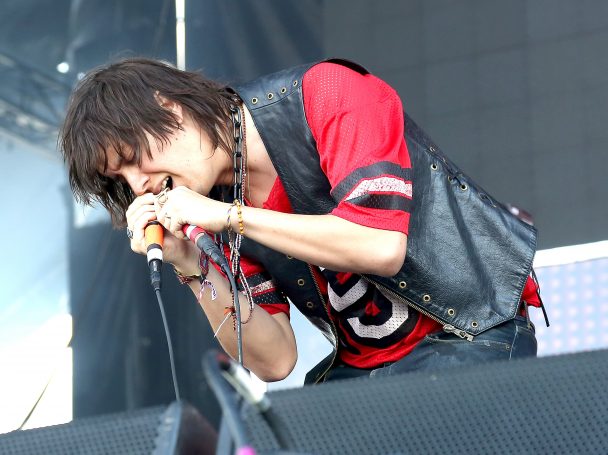 Julian Casablancas released Tyranny, his first solo album with the Voidz as his backing band, back in 2014. And in a new interview with the Gear Fiends podcast, Voidz guitarist Jeramy "Beardo" Gritter reveals that they have a new album on the way....

Excellent news, some real corkers on the first one.

their biggest (?) gig ever supposedly. can’t recommend this enough. an insane crowd and the band clearly in a very upbeat mood. something genuinely brilliant happens within the first 5 minutes.

… and the newer songs sound great.