The Summer 2020 Wrestling Thread! Including: New Japan Cup! Fans returning to shows! AEW and WWE's continual race to the bottom!)

Here we go then lads, summer is upon us and with it the return of New Japan pro-wrestling after a truly crazy, unprecedented Spring. Here is the tournament bracket, starting tomorrow morning GMT: 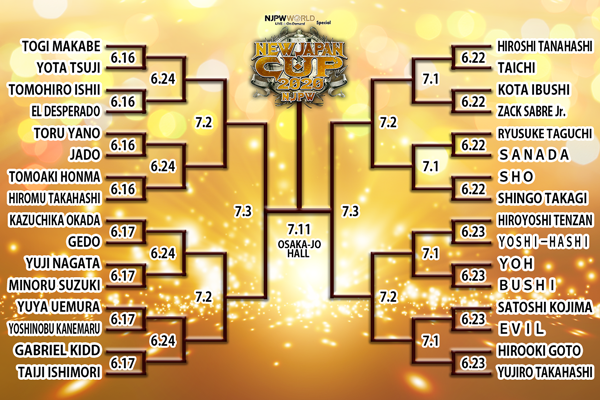 With the winner facing Naito for both the World and IC titles (assuming he still has both then) at Dominion on July 12th, who needs the Euros eh?

In America, we are now living in a post-Greating Wrestling Match Ever/Stadium Stampede world, so who the fuck knows whats coming next. Big shows this summer:

AEW:
July 1st & 8th: Fyter Fest special episodes of Dynamite (& Blood and Guts at some point)
September 5th - ALL OUT

Alright, let’s get back to work boys!

11am so actually pretty reasonable

Will set up my 2nd monitor… for work related reasons

Would’ve paid through the nose tbf

Probably gonna watch the NJPW thing despite not really having any idea what’s going on. My exposure to NJPW is limited to the last Wrestle Kingdom and the Omega/Okada matches so far. I’ve been thinking about digging further into the archives but the app is the most confusingly laid out thing I’ve ever laid eyes on.

Their tournaments are generally the best place to start to get an idea of the company, I learned so much watching G1 for the first time last year for instance

really think yano can do it

Yano v Takahashi should be excellent bants in the 2nd round

posted this before but this browser extension really improves njpw world https://njpwext.us/

Do love a good tournament. I do love some proper carnival nonsense in wrestling but the pretense of it being a fair sporting competition is nice. As much as I’m enjoying it I’m disappointed AEW jettisoned that side of things almost instantly.

I’m using the app on a firestick which is just absolute chaos. I’ll give this a go when I’m on the laptop though, cheers.

One of the problems with AEW trying to serve literally all tastes is it’s hard to properly engage with a tournament or old fashioned sports based presentation if it’s sandwiched between a deatchmatch and a comedy match. They definitely had the balance right 4/5 months ago, less so now.

no idea, losing those ppvs because of the pandemic I’ve not really got any idea who they’re looking to push (shingo maybe?)

looking forward to zsj vs ibushi in the first round. I know we’ve seen that match a few times now but it’s always a fun time

I think they’ll go safeish - get the biggest stars in the mix with Okada and Ibushi but hoping Ishii gets a big rub. I forgot Suzuki was still around

but he hasn’t got a prayer really.

Yeah the Amazon app is a bit of a nightmare unfortunately, think you’ll enjoy this based on what you are looking for though!

It’s cool that everyone gets so much input into the creative side of things but it is just all over the place tonally. I think I’d be happy if they just had someone paying attention to the rankings. They haven’t made a lick of sense since they started doing them. Either have them mean something or, if they’d rather just put latest shiny new guy in the main events every time, just drop them altogether.

Matt Hardy especially. He’s more or less where I draw the line because I love Orange Cassidy and can live with Brodie Lee just for his workrate if not the Dark Order gimmick, and find Jericho’s silliness mostly acceptable.
But they should just tell Matt to fucking stop, he’s honestly dreadful.