This guy getting hauled off a plane

It’s a fucking crazy system that airlines are allowed to overbook flights so they frequently find themselves with too many passengers and have to offer incentives for people to take delays. I understand why it happens - that enough people miss flights that they’d be flying with empty seats, which is less cost effective, so they’d just charge more and pass than on to the customers - but since I’m going to be ripped off by an airline regardless, you may as guarantee me a seat tbh.

Saw a situation very like this last time I was flying internally in the US, can’t remember the exact ins and outs but they they let a guy board the plane who was borderline and just after he sat down, someone came and apologised and said he’d have to deplane - he refused, said he already had his seat now and wouldn’t be moving. Went on for about 15 minutes, escalating levels of staff coming to tell him to leave and him refusing, eventually security came and he went with them relatively calmly. But he had every right to be furious.

Good for them (haven’t read it)

Oh of course I completely get that. But that won’t apply to the 200 odd people on the plane so I can’t believe that there wasn’t a couple of people who’d jump at the chance of some easy cash.

Yeah definitely. Just keep increasing the offer and someone will take it

Obviously they would have worked it out but it’s weird that it’s cheaper to put people in a hotel and give them hundreds of dollars when a flight is overbooked than just not overbooked.

That’s what most other airlines do.

NEW: United CEO in email to employees - "Our employees followed established procedures for dealing with situations like this." https://t.co/L1Uh0c9kj3 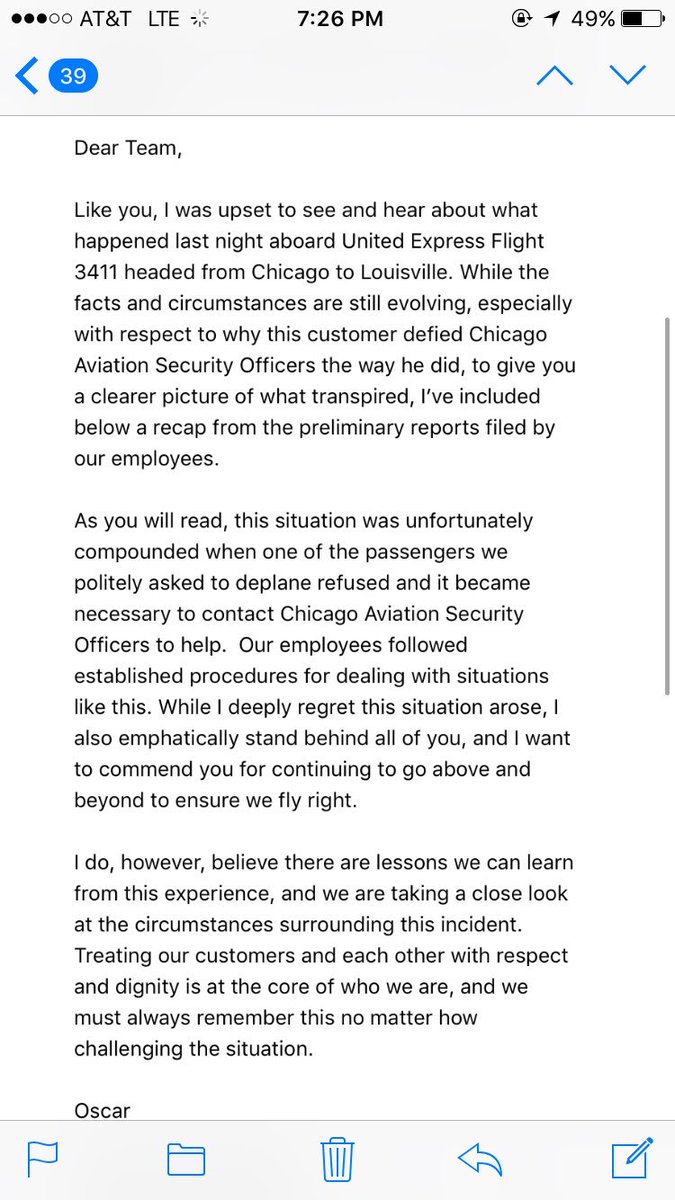 I’ve only flown with United a couple of times and they weren’t particularly great but did the job. The stuff being written is that they are really tight. Apparently there are reciprocal agreements across airlines where crew can fly with other carriers for work purposes. So not clear why that wasn’t done.

This could come across controversial I know the situation is completely out of order but does anyone else find it a bit strange that when faced with airport police telling him he needed to leave the plane he just gripped on? I would get annoyed but I wouldn’t just hold on especially if my family were already off the plane. What did he think was going to happen?

He was a doctor and had to be at a clinic to see his patients, that’s my understanding of it

going after that sweet litigation dollar. the doc knows what he’s about.

It was a free indirect speech, buddy!

If it was the airports own officers that were forcibly removing him in such a manner then i guess it’s not really United that the blame lies with. Presumed it was their own staff. Bov tho

There’s a point where being a willful contrarian isn’t really defensible, you know.

There’s a point where being a willful contrarian isn’t really defensible, you know.

You HAVE read the football threads, right?

Really wasn’t my intention at all? From the first reporting I had thought it was United Airlines staff that had manhandled him, not the airport’s.

Unless you meant me saying “bov tho”, which I meant as in I don’t really care that United are getting the bad press for it

I’d take the shirt off of any mans back; bastards.