Severance really is brilliant. One of my favourite things this year.
Pachinko was also quite good on Apple. And We Crashed was enjoyable viewing too.

Yes, I’m tempted to get Apple TV just for this. Here’s another free offer:
https://redeem.apple.com/atvselena-emeia

Ooh cheers I forgot about that offer

Thanks for this! Can finally finish Severance now

Really enjoying Arcane on Netflix. No idea how it ties to League of Legends (which I have no desire to play), but the design of the world is a delight, the animation is stunning, and the plot and characters are interesting enough. 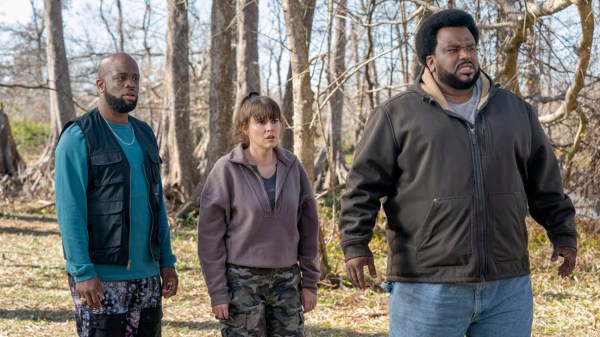 Craig Robinson plays a cash-strapped would-be entrepreneur who teams up with his Uber driver (Claudia O'Doherty) for a snake-hunting contest in the comedy series from Luke Del Tredici and Dan Goor.

Craig Robinson was amazing in B99, saw the trailers for this, then forgot about it.

Episode 6 of 1899 is just as bad as the five previous. Excited to see 7 and 8 and then never to think about this nonsense again.

I looked up just how many people are needed to fire the boilers on a steam ship the size of the Kerberos and it really brought home how stupid this show is.

now that’s when you know a show has really lost you!

The problem is the last few episodes seemed to repeat the same stuff over and over again How many times did (sometimes the same) characters stand in a wasteland looking at the mental hospital saying ‘the answers are in there’. Or climb through the hatches and into portals in the air. It happened constantly and was so boring.

I didn’t look it up while I was watching it but I was aghast and just wanted to confirm how daft it is.

Does the 2nd series of The Golden Lotus have the same soundtrack?

Thought it was good at first but it became so repetitive it started making me feel both increasingly tense and irritated.

(I know you’re supposed to feel mounting tension but still)

Why is everyone watching the stupid ghost boat show when everyone admits it’s rubbish. Just stop! Do something else with your time!

But I don’t want to do something else with my time, I want to watch the stupid ghost boat show.

7 episodes in I’m in too deep to give up now.

I’m thankful for it. It was/is on my wishlist, and I’m hoping the continued negative posting about it will stop me from watching it.

Having said that, it might just need one person to praise it and then I’ll ignore all of the naysayers and jump right in!

I watched about 10 minutes of the ghost boat and stopped. Loved it

Was going to jump ship (wahey) on Ghost Boat two episodes in but the TV vetoed it, now I’m in for the long haul (wahheeyy) because it’s one of those shows that cynically withholds all its key information until the last episode (I’m assuming).

It’s a load of guff though, and not in a good way like “Dark”. And while I like the idea of a multinational/multilingual cast, in practice it just leads to endless scenes of one character monologuing to another character, who doesn’t have a clue what they’re saying.