One was playing “Music When the Lights Go Out” by the Libertines.

The other was playing “Where is my Mind” by the Pixies.

Seen any buskers recently? Were they playing anything that you wouldn’t consider part of the standard busker’s repertoire?

There was a guy that used to play sitar with a falcon on Market Street a few years ago. 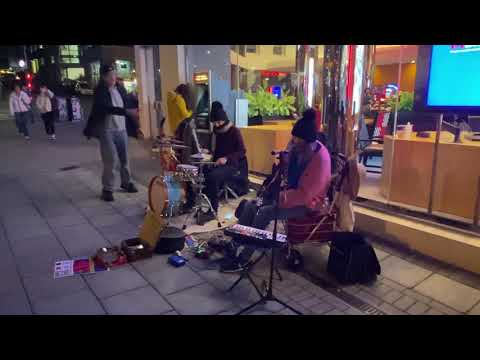 Feel like every busker these days is mic’d and amped up. Absolute disgrace. Can hear the pricks from miles away.

And half of them are just someone singing in that awful x factor warble over a backing track. Sick of them

Yeah, saw a busker outside Kingston Bentalls centre. Some young kid that looked a bit like Kurt Vile. He was a pretty good guitarist etc but his setup/sound was soooooo bad. Was on some shitty little vox amp and it was not good.

Used to be an old man doing Rat Pack covers in Bath and occasionally playing the trumpet over the top. The lad who only knew No Woman No Cry and whose guitar only had 2 strings was still the best.

And half of them are just someone singing in that awful x factor warble over a backing track. Sick of them

Yeah this should be banned, nobody wants to hear someone butchering Hallelujah over a solo piano backing track.

The guy doing blues standards accompanied by a skeleton playing the drums: 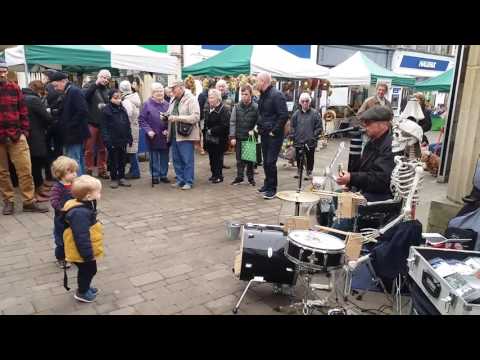 There’s a nice old dude in town that plays stuff like Albatross, Layla and the main Third Man refrain. Retired, rides around on an old shopper with his guitar slung over his back

We always get the pan pipes outside Primark

This Lad gets out across the road from my shop (this video is filmed on the high street of my town). Very fun for about 2secs then highly tedious for 4hrs

I used to know a busker a few years ago, he said he used to spend hours and hours practicing different songs, then realised that people only walked by for a few seconds, so what’s the point?

So then he started just playing around with one chord at a time, and found that people were roughly just as likely to drop a few coins in for that as they were a song.

Then he did some experimentation, playing different chords and seeing which was the most profitable.

For some reason, he found people most likely to chuck money in his case for G-Major, so that was all he played from then on. 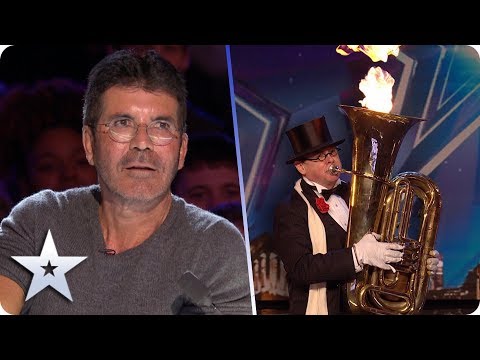 The guy in Manchester who dresses as Mario or Darth Vader scares the piss out of me.

There’s a guy on Northumberland Street sometimes who do twinkly piano over generic dance music. Either his playing ability isn’t great or he just gets nervous playing though and he’s often out of time or hitting the wrong keys.

There’s also sometimes a guy who uses a loop pedal to do one-man symphonic metal. Truly awful stuff. He was by the Monument once doing the Game of Thrones theme and I’ve never left a public area faster tbh

Never forget the time that a local, godawful busker - who enjoyed howling Budapest by George Ezra multiple times a day several times a week RIGHT OUTSIDE MY OFFICE with an amp - searched ‘busker Tunbridge Wells’ on Twitter and found my tweets about how terrible he was/complaining to the council about how obnoxiously loud he was. He decided to broadcast them to his 2,500 followers on Instagram (he also tagged my Instagram account) and I got loads of angry 17 year olds from Newcastle asking what I’d ever done in life. I obviously sent them my gameshow wiki page I didn’t

I muted the app for a while but when I next looked at it he’d then repeated the content several times over a course of weeks which was a bit weird.

Used to see Mark Kermode’s skiffle band busking in St Anne’s Square in Manchester now and then in the 80s.