Anyone have some good stuff to read about what’s going on in Venezuela at the moment?

This was quite good not least because it highlights who the opposition actually are and what they stand for. 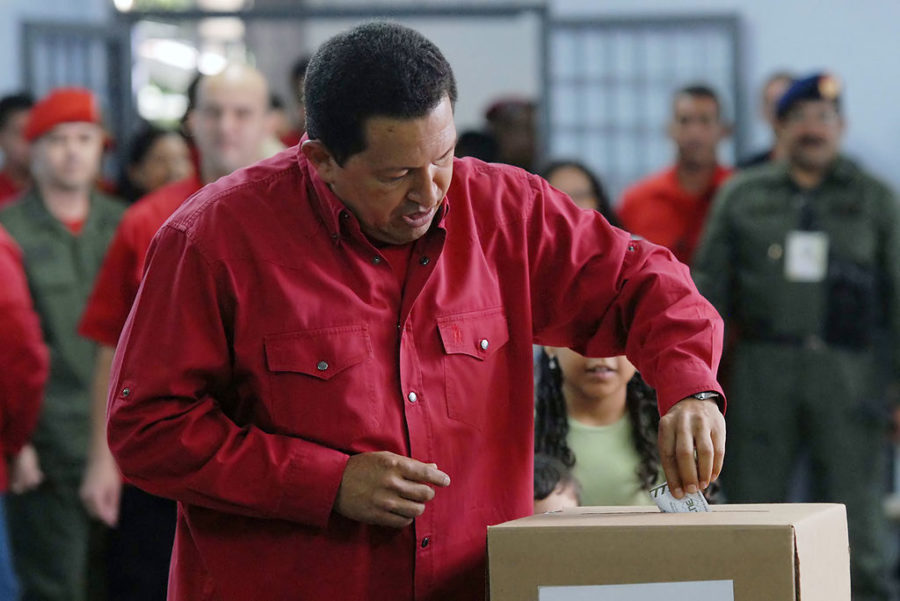 Which Way Out of the Venezuelan Crisis?

As Venezuelans go to the polls this Sunday, the country faces a choice between deepening revolution and an elite-enforced rollback.

Yeah was going to link to the Jacobin article, which is good if an obviously American take.

This is a pretty informative interview too

Venezuela Is Collapsing, and No One Seems to Care

Could a civil war be next?

Plenty of takes so hot you may wish to wear protective clothing over on twitter.com

Ha, yeah but I can’t make head nor tail of the current Twitter scene on this, just endless accusations of various people being complicit in horrible shit.

That and wondering when Corbz is going to say anything about it.

it’s fast becoming the new syria in terms of biased and confusing coverage. everyone seems to have a dog in the fight. the jacobin article listed above is quite informative but it makes me wonder if i’m saying that because it’s a true and accurate account of the situation or if i’m sympathetic to their version of the story. like syria, every source has a heavy whiff of manipulation and omittance, and it’s taking me a while to figure out what to trust and what to dismiss. e.g. the constituent assembly is either an admirable move towards anarchist collectivism or a deplorable lurch towards dictatorship. not sure what to believe or how to get past that tbqh.

that said, stay away from the guardian’s coverage - they’ve basically somehow managed to turn the suffering of a poor nation into yet another excuse to beat the shit out of corbyn and by extension socialist/redistributive politics.

The leader of the actual government hasn’t said shit, I don’t see a huge responsibility on Corbyn to say anything either way. Even if you were to say well he used to praise Chavez, this isn’t Chavez and regardless of what you thought of him denouncing the Venezuelan government now would be a separate issue really so I couldn’t give a monkeys what Corbyn does and basically think it’s more toothless hounding of Corbyn for hounding of Corbyn’s sake.

Nah, it’s just ‘moderates’ using it as a stick to attack Corbyn, tbh. They don’t really care what’s happening to the people in Venezuela or what it means in a wider political sense.

Yeah I mean I get the narrative of ‘certain sections of the British left and Venezuela’ yadda yadda but Corbyn’s prospective response or lack of it both achieve the same purpose - nothing. But if people wish to waste their time on it it’s up to them.

Twitter has been good for highlighting just how shaky some of the evidence coming out of the country has been though.

Half of the stories are coming from a single Florida-based alt-right blogger with links to the Venezuelan financial elite. Even Amnesty are using him as their main source, ffs.

I have a Venezuelan friend from Maracaibo. He’s lucky enough to have a Greek passport as well through his grandparents, and he’s recently moved to Germany, possibly permanently. He used to go back to Venezuela and work in the oil/petrochemical industry for 6-12 months as a safety inspector, save up the money, and then use it to fund things like living in Barcelona. That’s become not worth the bother now, so he’s just decamped to Germany without the nice savings cushion.

The main things that were affecting him were a massive explosion in crime, and also no-one even in the country knowing what the hell is going on. The amount of phones and car parts he’s had stolen this year are incredible, and in the end the car itself was stolen. That was unheard of before- Maracaibo is the oil capital of the country, and cars were very cheap to run because of the cost-price fuel. Also being a gay man makes him even more of a target for muggings.

Oh, I’m not saying that the situation isn’t bad in the country - successive governments have based the entire economy and society around the price of oil, which has collapsed in the past three years, but whoever was in government would have seen breakdowns like this.

Sadly, many of the reforms brought in by Chavez were laying the foundations necessary for a post-oil economy, but they weren’t done early enough.

I meant it’s more like he’s not complaining “I’m living in this hellscape where everyone is starving and there is no toilet paper” more like “for god’s sake my phone got stolen again. second time this month”. So I imagine those things are going on in the country, but to what extent is anyone’s guess. Maracaibo has always been safer and more prosperous than Caracas though, because of the lucrative oil and chemical industry there.

Also my friend’s family are university lecturers who are fans of Chavez and his educational reforms, but not fans of either Maduro or the neo-liberal opposition groups. Maduro is too heavy handed and authoritarian, but the opposition groups are too capitalist.

The opposition are borderline fascist, from what I’ve read.

My good friend is Venezuelan and was talking about how bad the situation was over a year ago.