the new album is out today.

Went through it once.

I enjoy a lot of it, as mixed as the styles of some of the songs seem to be.

Donkey Kong and Spider Bones are probably the 2 I enjoy the most. The 2nd half of Diamond Ballgag is something I think I’ll regularly look forward to.

I haven’t heard the entire Copeland EP, but I guess it was put up to stream yesterday.

I really like the production on Friends Don’t Owe, the way the vocals sound. Great album. Biffy Clyro are missing a trick just having him play offstage and not inviting him to be a full time songwriting member of the band.

Really don’t get the making someone play off stage thing.

Yeah it always strikes me as a dick move by Biffy but Mike Vennart doesn’t seem overly bothered by it.

Yeah, i mean it’s still probably quite fun being heard. Probably have to pay him less to be heard and not seen

New album is starting to click for me, fairly solid but disappointed that the only real single/banger on it is Donkey Kong. The first album had Operate, Don’t Forget The Joker, and one more I think (Retaliate?).

Spiderbones and Diamond Ballgag, both bangers.

He doesn’t play off stage, although he and Gambler are often not as well-lit as the other three.

He was definitely off stage (or at the very very edge at least) every time I’ve seen them since he joined, last time was in Dublin 2 years ago so they might have let him sneak out a bit since then.

He’s literally on-stage in this picture. Biffy Clyro is the three of them, always will be, but Mike and Gambler are key live players these days and hardly like Slipknot’s bass player playing actually backstage. Arena show I saw on Ellipsis Mike ended up front of stage, on the lip of the crowd pulling some serious moves by the end.

Yeah, he’s standing off of the side of the triangular stage set isn’t he though, behind the side spotlights and the big white light rig. I never said he was playing backstage or not visible, although for 90% of the show the lights meant that he wasn’t visible, this is the only photo of 30+ where you can see any trace of him, I said he was playing offstage.

I kind of agree with some of the comments about this album being good and having some key tracks, even beyond Donkey Kong. Although I think that is still the album’s highlight.

on a note about Biffy, they have a film soundtrack titled Balance, Not Symmetry coming out soon, and the film itself is being released next Summer I guess.

There was filming in Scotland over the last month. I wonder if Mike might even play on some of it.

Had a bit of a doing over by the far-right today sadly. “Robinson” is a pro at arguing with people, that’s all he does all day long because he’s a c**t. Mike did exactly what most of us would do and just because he is too drunk/upset to not be able to break down into single chunks why the guy is a Nazi, doesn’t make it less so. In fact until it’s clear Stephen has supporters with him, Mike holds his own admirably.

Trigger warning, this is a link to “Tommy Robinson’s” Facebook page.

Fuck this is horrible.

I feel like saying something, at least on Mike’s FB page but I know it’ll just be a waste of time.

I may just take this to my blog instead.

On a less contraversial and social/political note, I finally made a video the other day showing my To Cure a Blizzard Boxed Set: 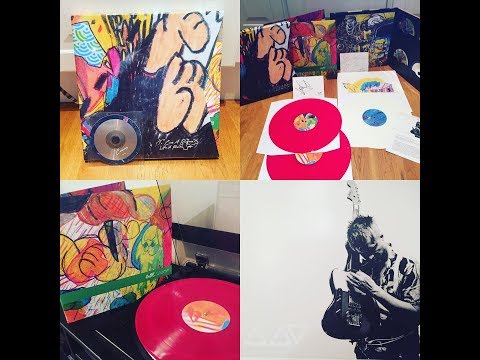