What's the cheapest gig you've been to?

Rolo Tomassi played Soup Kitchen a few years ago and tickets were a fiver. Good value

Does guestlist count? Or free entry?

Assuming £2.50 day doesn’t count, The biggest for cheapest would be Metallica at those £5 O2 Arena shows back in 2008

Fugazi were good for this

The Levellers for free in Kingsbridge

They were, I went to this. Limp Bizkit did a show in Finsbury Park and it was £2. Insane value.

A group of about 6 of us would generally get in for half price by waiting for the first band to finish and asking the organiser who was on the door to let us in cheap, which he always did. The Courteeners at The Castle back home was like £2.

Fuck knows how much Arctic Monkeys at the Attic was but it can’t have been more than a fiver.

One that I was there for it happening but couldn’t make the gig so didn’t partake in the ticket giving and although it is free I still find fascinating to this day. Some of Rihanna’s “people” were in Pen and Pencil the night before she played Old Trafford and they were giving away free tickets in bundles to everyone in there. About 30 people from work ended up going to the gig off those free tickets.

Been to a load of freebies like Wu lyf at St Peter’s Church but not many £5 or less gigs thinking about it. Oh I suppose the sets they did at An Outlet were £2.50

Once got free tickets to a Castlemaine XXXX show at the Barrowlands in the autumn of 1996 where the promised bill was Pop Will Eat Itself supported by King L (Gary Clark from Danny Wilson).

PWEI never turned up (and may not have even known about it - or perhaps were busy splitting up) so instead we got three flavours of the Clark family - Gary Clark’s King L and his brother’s band the Swiss Family Orbison. Then Gary came on at the end and did an acoustic version of Mary’s Prayer as a bonus, but it wasn’t what I wanted, Brian.

Haven’t drunk Castlemaine XXXX since (but who has?)

For a while, Bungalows & Bears here in Sheffield put on free entry gigs with reasonably established acts on the bill, to drum up business on slow nights in the week. I saw Stealing Sheep, Shopping and Peaness (different gigs) amongst others. This would have been around 2015-2017 time.

Also, the Fuzz Club at Sheffield Uni in the early 2000s (Thursday nights, £3 in, non-students welcome too) were pretty good at booking bands who were just on the verge of making it big. I saw The Killers and Keane there, and others that I’m forgetting.

Fugazi were good for this

Definitely. This is the only time I saw them and it was cheap even in 1992. 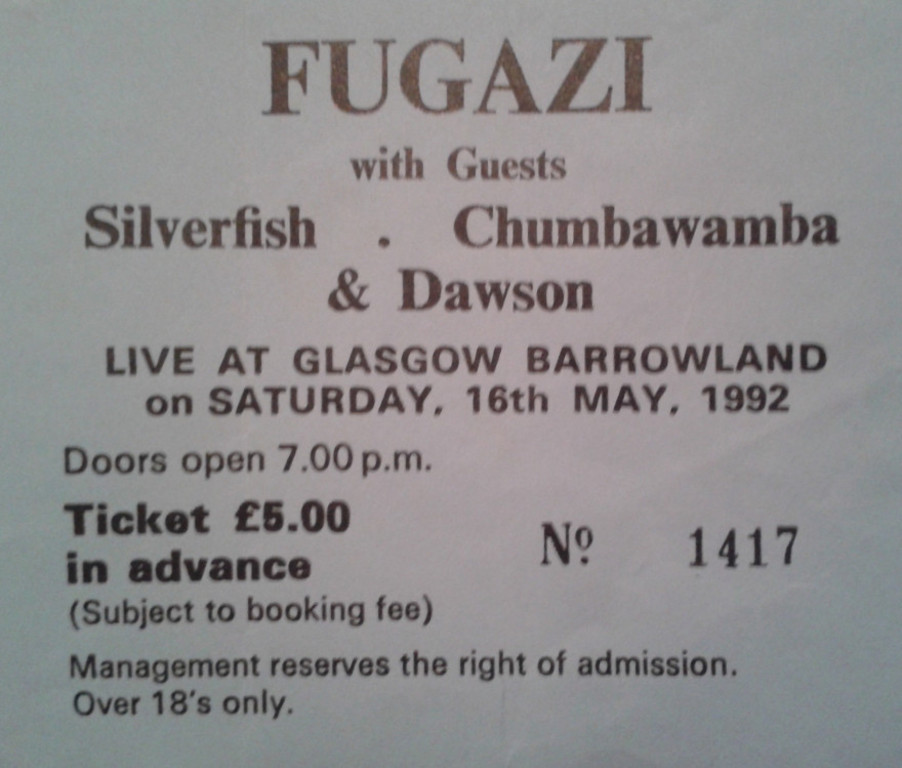 All these people paying a fiver for Fugazi when you could have seen Limp Bizkit TWO AND A HALF TIMES for the same price.

Have you seen capsule are doing a follow up to the home of metal stuff with a exhibition/project on the mermaid/Birmingham grind? they’re looking for memories/flyers etc… I’d have been quite happy to go home after Silverfish at that rate.

A Place to Bury Strangers and Japandroids were on a bill together here in 2009 for £7 but I made use of the venue/promoter’s short lived ‘half price tickets if you buy them from the bar on a Monday’ promotion and got mine for £3.50

Also got a £3.50 ticket for Cymbals Eat Guitars at the same time.