I Believe
I Remember California
I Took Your Name

O hey all mine are next to each other, that’s cute

That would be because I added them to the list at the same time!

looool, I thought it was alphabetical and they all start with I

as if The Wrong Child isn’t sad enough, it only gets a 1! 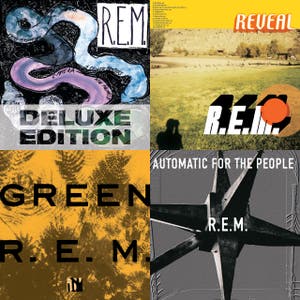 Gonna be honest, I might have heard them but I don’t recognise 50% of these song names

(I’m rubbish at knowing song names tbf, I did this with the Beatles and turns out I knew all of them)

I did not vote, but if I had voted I would have given At My Most Beautiful a point. Cool story

It was in my preliminary list.
Really good song imo

Young Michael Stipe was such a hottie. Respectfully. And older tbf, but those hair goals.

Reckon we might see every album represented in the final list? From a glance there I think we’re only missing Collapse Into Now? And one of you out there must have enough of a soft spot for that Marlon Brando one to chuck it a few points

Always wonder what it feels like to go from mophead to bald… Is the lack of maintenance and weight incredibly freeing? Does he miss it in the cold? Or feel happy about how much easier it is to just wear hats?

Realised a few weeks ago that it’s the only album of theirs I don’t have on CD and that I’ve never heard it. Think I’m going to leave it that way too.

Collapse is ok, some good songs, something’s missing though for sure, could imagine Discoverer or Blue getting some points though

I’m so glad they didn’t split right after Around The Sun, that would have been crap

Sometimes think thats a nice position to be in.
At some point in future you might get a real hankering for ‘new’ R.E.M. songs and there’ll be an album full for you.

I’ll hold up my hand for Stand and Pop Song 89.

Amazed nobody else joined me on those. I can almost taste the kingmakering to come.