Anyone got this? Basically dedicate a wall to shelves and cupboards and that…Thinking of getting it done but once it is we would be stuck if we don’t like. But we really really need something like it…
Show me examples which aren’t going to be £££

Also: our oven keeps shorting out the downstairs circuit when you shut the door, is this dangerous you reckon?

no of the storage, I need to see an example so i can find better examples

We’ve got something like this for the youngest’s bedroom but we just used IKEA shelving / cupboards. Really handy though!

i have bookmarked this thread for future reference We have some of the Ikea “Kallax” range or whatever the version was before that against one wall.

Browse our full range of products from dressing tables to complete modern kitchens. Click here to find the right IKEA product for you. Shop online and in store today.

Actually it’s exactly the same as this…

After long discussions about whether we needed one, whether we could afford it, the pros and cons etc, we finally decided to take the plunge and get a Lazercat installed in the living room. [image] Yes just like that! But with cupboards for stuff we don’t want out out

Your oven should be on a separate, 30amp circuit, so there’s definitely something wrong there…

Don’t Sharps do that kind of thing?

Whether you need a dedicated base to work from every day, or an occasional workspace, our range provides a multi-functional space for you to feel at home.

Lots of the ikea shelves had doors you can fit as an optional extra.

You can also put some cupboards at the bottom, and then fit shelves on tracking along the wall, which has the added bonus that you can move the shelves to fit in round the stuff.

Here’s my pinterest album of stuff like this I’ve collected over the years (I guess I have a pretty specific taste in interior design though, which is probably obvious from the album) 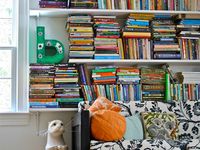 You can do a lot with Ikea systems, including adding cupboard doors, lights, cable slots and the like.

We wanted something similar in our living room, but had to go for something bespoke as our room is an odd shape, so I went for 18mm birch ply main framing and white painted MDF adjustable shelves. It was more expensive than I wanted…

Actually just bought a load of wood from architectural salvage at the weekend for a friend who is a carpenter to make us a massive shelving unit in our front room. Got this lovely stuff that was church pews. It’s more expensive than just buying new timber but it’s already treated and the edges are all neat and rounded, which will save on labour costs as all he has to do it slice it up and slot it back together, if you catch my drift. I might post pictures when its done (3 weeks or so).

Would really love to do some cool interior design and have something like this but (1) furniture is bloody expensive isn’t it? and (2) renting. Alas.