Golden Globes 'reform' and the HFPA

I managed to miss all this. I guess maybe we covered some of it in film threads? Dunno.

The Hollywood Foreign Press Association seems to be massively corrupt from all the reports (allegedly? lol) and I’m getting most of my detail from this article:

UPDATED: A group of more than 100 Hollywood publicity firms say they are concerned about the Hollywood Foreign Press Association’s recently released plans to overhaul the organization. Time&#…

Seems this is what they’ve said they’re doing

In a 70-3 vote on Thursday, the HFPA members approved a plan put forth by its board to radically overhaul the non-profit. The plan includes measures to increase the number of people of color in its ranks. The plan also includes new restrictions on gifts that the members could receive and payments for work on their committees.

Immediate plans include finding a vendor to set up a complaint line, hiring a search firm to compile a list of candidates to fill newly formed staff positions, identifying new members to increase membership by 50% in the next 18 months, creating a list of DEI consultants and retaining Ropes & Gray to facilitate the reforms.

Not gone down at all well. One key paragraph of the Time’s Up statement

“The HFPA’s list of recommendations largely contains no specifics, no commitments to real accountability or change, and no real timeline to implement these changes. The HFPA’s proposed September 1 deadline for some — but not all — reforms come well after the next award cycle will have started. And even its proposal to increase membership by 50% comes with no commitments that the decisions to admit new members will be made in an equitable and inclusive manner with full transparency and oversight.

Mark Ruffalo has said this 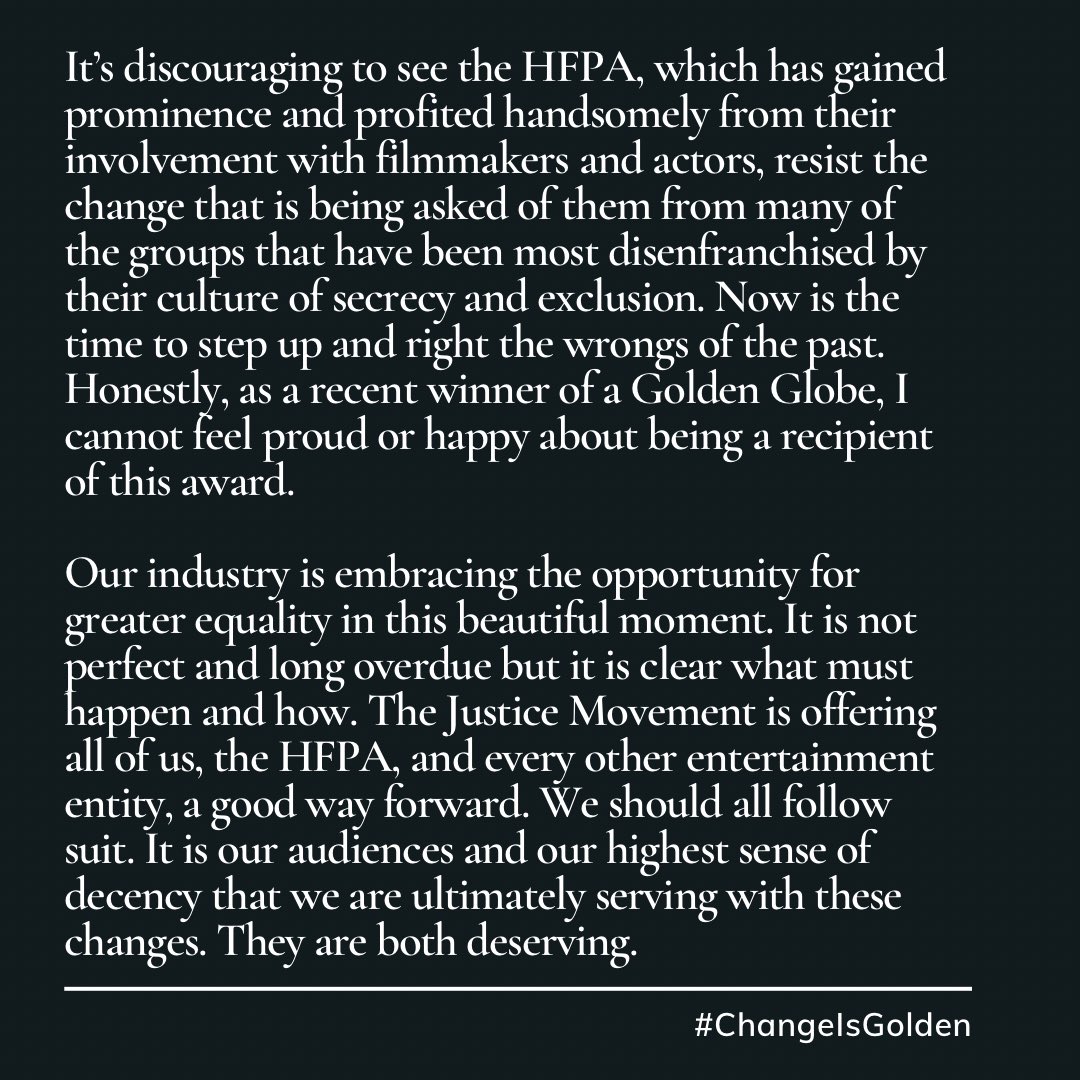 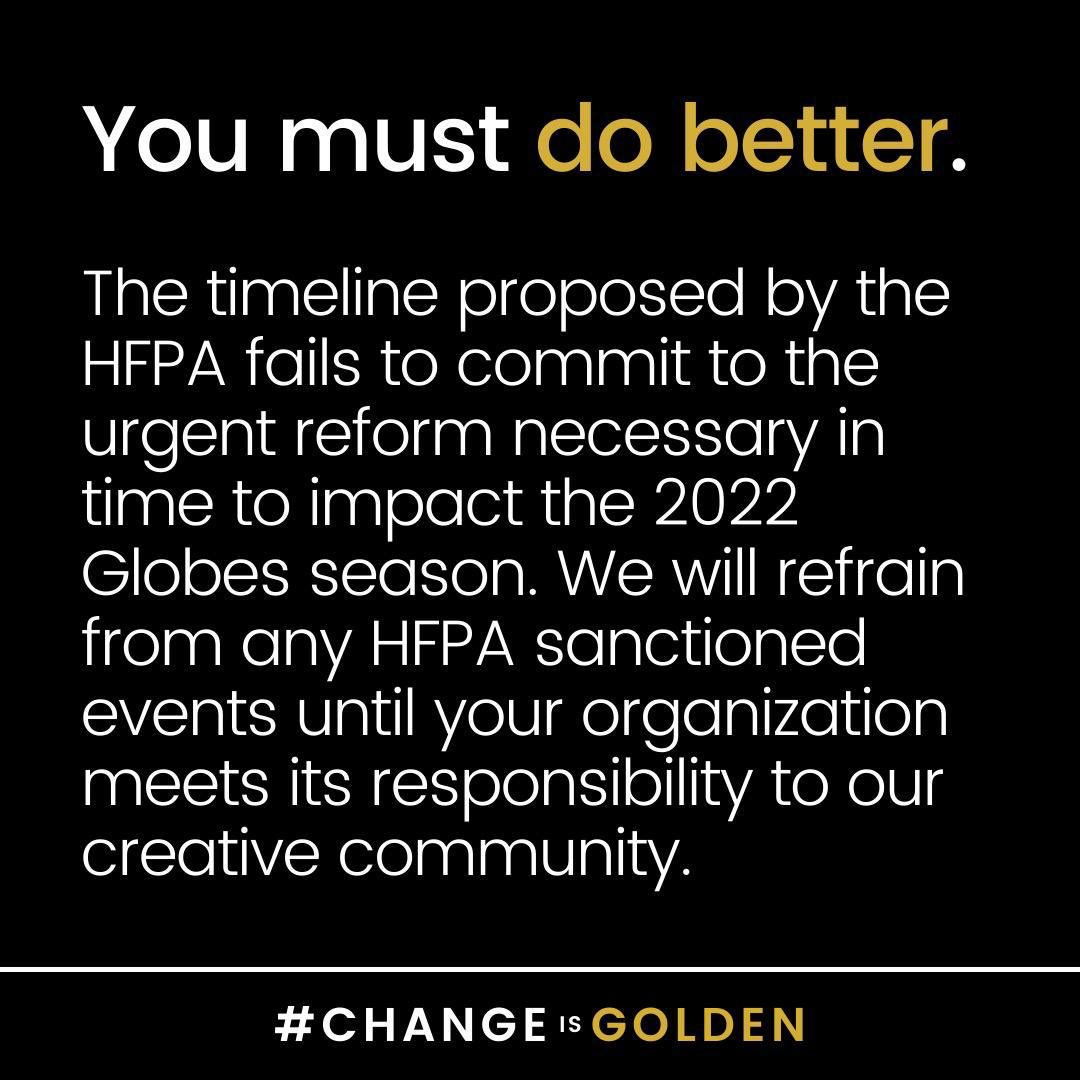 I mean I don’t think anyone’s shocked by a bunch of white elitists finally getting called out for racial disparities within the industry. Hope they do better obviously, doubt they will. i.e. Oscars.

Well BAFTA’s making attempts to correct this so maybe?

Mark Kermode reckoned the Golden Globes massively influenced Oscar choices so it might fall inline if it were to change? This is from his The Good The Bad and the Multiplex book in 2011

The venality of the HFPA membership is legendary and should have made the Golden Globes the laughing stock of the world; after all, these are the people who gave a New Star of the Year award to Pia Zadora, an actress so lousy that, as the popular gag goes, an ill-judged title role in the stage play of The Diary of Anne Frank prompted an audience member to shout ‘She’s in the attic!’ when the Nazis turned up. When Globes host Ricky Gervais ‘joked’ in 2011 that HFPA members hadn’t only nominated The Tourist because they wanted to meet Johnny Depp but that ‘they also accepted bribes’, the laughter that filled the room was as hollow as Worzel Gummidge’s head.

The Globes would be nothing but a horrible joke were it not for the fact that their position in the so-called ‘awards calendar’ means that they have an unhealthy power over Oscar voting. Since American Academy members don’t have time to watch all the eligible releases, they tend to wait until the Golden Globes shortlist is announced and then make their selection from that random field. Thus a group of toadying numbskulls effectively get to control the first stage of Oscar voting, thereby elevating their otherwise utterly irrelevant standing in the world and (more importantly) skewing the results of the most prestigious entertainment awards ceremony in the world. If you don’t believe me, take a look at the list of Golden Globe nominees for the past ten years and then compare it to the list of Oscar contenders for the same period. You’ll be astonished how closely they match up.

Here’s your last ten hosts of the Golden Globes.

Yeah. I mean 2010 Gervais wasn’t really the known horror that 2019’s Gervais was I guess? Trying to recall.

That is a really fucked up narrow list of presenters, though.

I mean the BAFTA’s may be slightly ahead of the game I guess with Clara Amfo in 2020 (but of course she couldn’t do it on her own Edith Bowman and Dermit O 'Leary had to assist). Prior to that just going back to 2002. Hmm seeing a pattern here?

It just stems down to the fact that these old white elitist producers want the best ratings they can get, even though these award ceremonies ratings plummet every year. Yet they are still scared to let a person of color host because its blase to see what could possibly happen. Fucking sad.

I find it funny that Hollywood/the media have all suddenly decided that the Golden Globes aren’t worth the hassle and that the HFPA are a bunch of charlatans, as if that hasn’t been obvious for years. I assume they’ve secretly got a replacement awards planned or they’ll just chuck in some extra parties to schmooze Academy members instead. I also assume the Oscars and the Emmys will be quite happy to be the only film/TV awards show in town now.

And now NBC has dumped the show and Tom Cruise has returned his Golden Globe awards. Can we get the Grammys cancelled next?

Yeah this is the bit that I am finding really baffling. Everyone has known they’re a scam for decades?

Obviously Tom Cruise handing back those awards seems good although:

1. I am BEGGING you all not to praise Tom Cruise over this cynical Golden Globes move. He is essentially the co-leader of Scientology which is a deeply homophobic, misogynistic, and racist criminal organization. It's a cult that destroys people's lives and separates families. twitter.com/yashar/status/…

This cult leader deserves no praise for this grossly cynical move. Do not make this like the day you all praised him for his fake COVID rant. There are thousands of people imprisoned within Scientology right now because of him. DO NOT CONGRATULATE. https://t.co/NQCbcPQwTU

2. Your praise of Tom Cruise will be shown to members of Scientology who are are deeply in debt and stuck in a cycle of fear and intimidation. Your words will help keep them in as Tom is seen as the ultimate example of what a Scientologist should be. twitter.com/yashar/status/…

12. In the coming days, members of Scientology who have either been forced to spend money they don't have or work in indentured servitude, will be shown your tweets praising Tom Cruise. They will be told..."The world is praising the #1 Scientologist" It will keep them locked in
1101010 11 May 2021 03:45 #16

Yeah this is the bit that I am finding really baffling. Everyone has known they’re a scam for decades?

At a guess there’s some loss of power going on in the wake of activism. I mean they’ve known it was a scam but I’d guess it was a scam run by people who could affect the careers of people in Hollywood so trying to take a stand was problematic.

Seems like the formation of the Time’s Up group in 2018 is maybe the united spearhead here alongside the LA Times doing an exposé on the money involved. Seems like with this sort of thing you only need to really knock a few parts before it starts crumbling.

I like Yashar Ali breathlessly declaring that Tom Cruise is a big wheel in the Church of Scientology who are an insane cult, as if that wasn’t even more ‘no shit sherlock’ than news that the Golden Globes are corrupt nonsense

Well yeah but I don’t think that deflects from his point, does it?