Alright, I’ll do this one

so our thoughts turn to Europe

The two Madrids cabeza a cabeza tonight at the Santiago Bernabéu

Also, I posted it in the other thread but just looking at the Premier League table this morning

best league in the world etc.

Subthread;
who deserves to stay up from the squads of the relegated teams? Anyone from Sunderland who’d be punching above their weight in the Championship? Anyone from Boro or Hull who would be a must-buy if they dropped? There’s a couple of obvious choices at Swansea you’d have thought, if they were to go. Come on premier league vultures who’s your carcass pick?

Pickford genuinely looks like he’s got a chance of making it at the very top. When I saw him a few weeks back at Vicarage Road, he really impressed on two counts. Firstly, he showed really strong hands when pushing the ball away from goal and secondly his distribution with his feet was outstanding.

Walter Mazzari said after the game he’s never seen a goalkeeper as good as Pickford with his feet - and he’s certainly seen many better keepers than I have.

He’d be a good signing for someone like Everton who clearly need a keeper, yet won’t be fighting relegation. Hope he doesn’t go to one of the top sides where he’s just going to end up on the bench.

Yeah, true… I’d like to see him at someone like Everton for a couple of years first rather than being plunged straight into the pressure cooker at City / United though. That sort of move has proven a bit of a career killer for a number of English keepers over the years (Chris Kirkland, Richard Wright, Scott Carson, Ben Foster etc). That said, if it did happen and Pickford managed to make the step-up, I’d be delighted to see that happen.

How are Celta Vigo in comparison to Swansea? I’m not feeling overly confident.

Clearly going to be an absolute shithouse of a game too.

Obviously a fitting end for United’s season would be to draw both legs of this tie, go through on a single away goal, then lose the final on penalties following a goalless game. So that’s what I’m predicting.

But you’ve won both finals you’ve been in so far this season. The treble is on. Believe!

Can Lingard produce the goods outside of Wembley is the question.

regardless of how much of a nob luke shaw probably is, his treatment is starting to look like typical mourinho workplace bullying now. if you don’t like him just drop him or sell him, it’s not hard 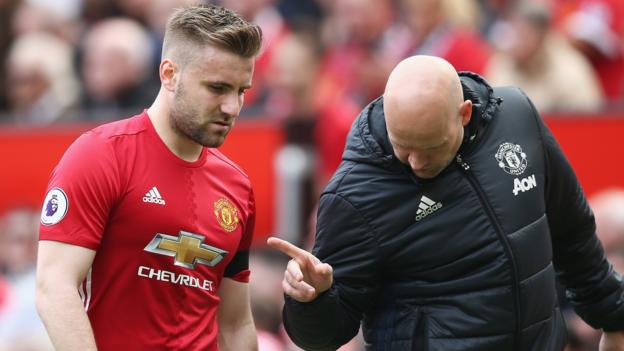 Manchester United manager Jose Mourinho expects Luke Shaw to have a "big injury" after the defender is substituted in the draw with Swansea.

No other games in Holland, so Ajax will be well rested for Wednesday’s clash with a possibly Lacazette-less Lyon.

Don’t want to blood another young keeper. Someone experienced, solid and unspectacular please. A Van Der Sar equivalent (Christ knows who that would be though)

Dunno, Oblak seems like a potential go-er for sure. I mean Schmeichel fits the solid but unspectacular bill tbf, Handanovic for a few years perhaps.

completely forgot foster had spent 5 years at man u, had to look it up

Think Pickford will be found out at a big club. Does the Hollywood saves but let’s in a few that you’d expect a top keeper to save, particularly shots angled across him.

Dunno who I’d go for instead. Brad Guzan?

Keepers who look good when kept constantly busy but struggle with the concentration/pressure levels of only being called into action a few times a match at a big club are a very prevalent breed. Pickford could very easily be one of them tbf, big risk to find out.

Nah, his Dad is a complete weapon. It’s no more his spiritual home than the Etihad would be.

Well, before he sells him he might as well try and get what he wants out of him. This is his technique. He wants a player who stays fit and doesn’t walk off the pitch when he could play on. I remember Klopp getting some stick for saying something similar about Sturridge, but there’s surely some truth in it when it comes to certain players.

I guess Mourinho has seen no response from Shaw from dressing him down in private, so he goes public to get a response. While it’s a management style that will definitely not work on everyone and clearly creates tensions within squads, it also has clear successes - like Mourinho calling Ozil a coward and later probably getting the best out of him we’ve seen.