This round starts on Sunday at 12pm
Movie soundtrack tracks.
The league…

Tracks that have previously been used….

Playlist of top 3 from each round… 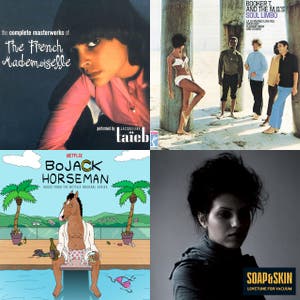 Think I’m going to go with something that isn’t necessarily amazing as a standalone but is great as a song choice in the film. So will get very few votes from anyone who’s not seen the film in question

There’s a song which is a great stand out moment in a film, which I think would have a chance of winning (although who knows!). I really like the song, but don’t know/like any of the artist’s other songs, so that interests me a bit less. Hopefully someone else will pick it and I can see how it performs and be jealous.
I will continue my habit of picking someone I like, that other folk most likely haven’t heard of, and be happy if they do moderately well. I’ve not seen the film the song is in though.

I’m going to make a suggestion that we all name the film our pick is from in the Music league comment when we submit, so we can check out the film if we like the song/piece of music at the end of the round.

Does anyone have a spare spreadsheet of every song ever used in a film? I’m sure there’s someone on here that has that.

I suggest also that you check if the song is on there under the soundtrack album in question rather than through the artists album, that way we can see it before the round ends!

My round, if its been in a film soundtrack or score then its fair game. Do love an exclusive song though

Find music from TV and movies. Get the full soundtrack listings complete with scene descriptions. Listen to previews, download & stream music, ask questions in our forums.

went from having no ideas for this to having too many

I’m going to make a suggestion that we all name the film our pick is from in the Music league comment when we submit, so we can check out the film if we like the song/piece of music at the end of the round.

Had a great idea for this then decided to use the song in a later round instead. Trying to pick something from a film I’ve actually seen as it seems pretty much everything has featured in a film at some stage or other.

Actually nevermind I cannot commit to that.

Got one of them on my shortlist too

My song isn’t in Spotify, so might have to skip this round.

Can you not choose another equally good track?