Yo, so, Self Defense have a new album coming very soon titled Have You Considered Punk Music? which is that title isn’t enough to hook you in I’m not sure what will.

It’s also quite an ironic title, as while SDF used to be a full-blown post-hardcore/punk band when they first started as End of a Year, as the years have gone on they have slowly refined their sound to something closer to atmospheric post-rock/indie as these already released tracks will attest:

They are for me one of the best (and most underrated) bands out there, perhaps because they’re caught in that between world of “punk” and “indie” which both crowds are often difficult to please (which is silly given they come from the same place originally). I find Patrick Kinlon one of the most engaging frontmen in all of rock music today, while guitarist Andrew Duggan is a brilliantly inventive player, especially given his hardcore background. The rest of the band are something of a worldwide cult, with recording members rotating depending on where the core duo are (there are some UK members for instance)

as a primer, here’s a best of I made for that thread we did a while back: 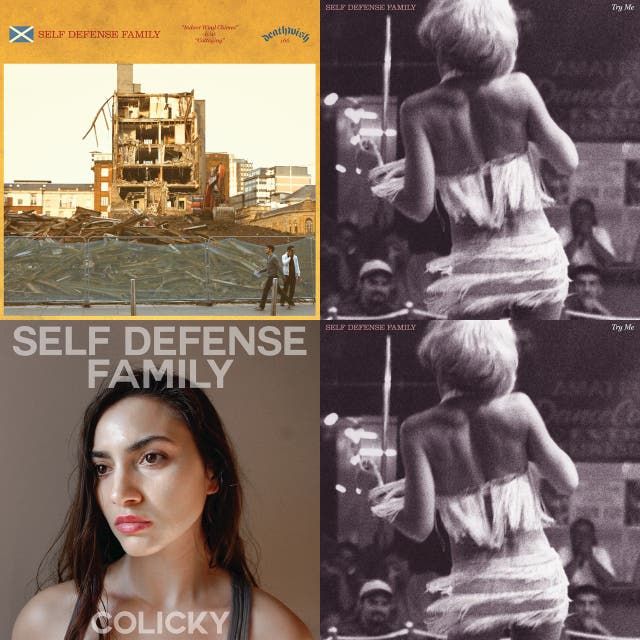 End of a Year Self-Defending, a playlist by Adam Lamont on Spotify

A playlist featuring Self Defense Family

I’m excited about this, although isn’t it like four weeks away still, darn it?

We met the singer on getting a bus to Paddington once, after a Drug Church gig. He seemed pretty friendly, although we were probably drunk and annoying.

Aye I chatted to them after their Glasgow show last tour, both seemed like good dudes, his twitter is quite entertaining too:

could the @moderators (or whoever) edit the title to include “- Have You Considered Punk Music?” please

I’m more of a Drug Church man but I’m quite looking forward to this - a lot of stuff from their flurry of eps/singles since Heaven is Everywhere has felt really slight and left no impression on me but I expect them to focus a bit for the album. And I do like the title track.

Oh I really like the End of the Year album I’ve heard and didn’t know SDF were the same people. Definitely will check this out then.

I find Patrick Kinlon one of the most engaging frontmen in all of rock music today, while guitarist Andrew Duggan is a brilliantly inventive player

Absolutely this. Buzzed for this album.

But yeah I kinda agree about what they’ve released since, apart from Colicky which is a monster

However you are also quite right in your assumption, it seems the singles in the interim were experiments towards the final album which is way better and focused

Of course it is. This is why I normally don’t post anything other than, “fuck it, cba” in the daily thread before my first coffee…

I did quite like a couple of tracks from Wounded Masculinity as well tbf.

this has a video now, by the same director and in the same style as the first video:

I goddamn love this record, but this song (the opener) is particularly amazing

These videos are really cool, though trying to listen to lyrics and read subtitles simultaneously makes my brain hurt.

I love that Patrick has quietly developed a weirdly soulful singing voice.

right? That’s one of the biggest things about this record, Patrick’s like actually a good singer now, which I appreciate could always be a bit of a stumbling block. The bit halfway through where he suddenly lets rip is so good

That amazing Drug Church song from the end of last year seemed to be the turning point.

I’ve always liked his non-singing voice but it definitely feels like a step up. I love that he always seems to be pushing at his boundaries and working to do more, be better. He’s like a one man war against complacency.

Can’t wait to hear the whole thing now. I’ve gone straight back to Heaven is Earth now that track is over.

We broke down the band’s sixth album with vocalist and lyricist Patrick Kindlon, and you can stream it here before its release later this week.

oh man, i’m so excited but waiting for an actual physical release.

Agree they are just one of the best bands - the way they have evolved over the years has been great and really interesting to follow. I loved End of a Year but the last SDF lp in particular is so much stronger.

They seem to have released it early on Bandcamp for anyone who’s into that kind of thing. Gonna listen to it first thing in the morning and will be back with #opinions

My #opinion is likely to be that it is good.

i’ll check this out, might make a change to endlessly replaying FJM, Kero Kero Bonito and that Partner album

Kinlon has a similar sardonic style to FJM imo

🚨 Hey! Grab a $5 digital copy of 'Have You Considered Punk Music' by @selfdfens over on @Bandcamp 2 days before release. 🎶 bit.ly/2lzvDBP https://t.co/xp6TRJyddK