💿 How Good Is It Really 💿 Forever Changes

Wu-Tang Clan storm to the top of the leaderboard with a scarcely believable 9.49:

After HGATR’s peer pressure week it’s time to give something back to @Funkhouser . Yes, at last, it’s Love - Forever Changes. How good is it really? Next week will be the 50th HGIIR thread and we will have a guest host. Register your interest here if you want to go into the guest host draw:

For the 50th HGIIR thread (which will be the one after the next one on Monday) I’d be honoured if one of you would be guest host. If you fancy doing that then register your interest below and I’ll select someone via the standard DiS method (discobot) next Saturday I’m not precious about the format so if you want to put your own twist on the thread then go ahead, the only thing I ask is that you include a number rating poll with options of 1 to 10 so we get a score out of 10 at the end

Was fortunate enough to catch Arthur Lee do this album twice in 2003, firstly in the tiny Gaelic Club in Sydney and then later that year at Glastonbury. Just lovely lovely stuff. This is a TEN all day…

Have given it a proper listen on a couple of occasions over the years but it didn’t click, seemed fine just a bit of a shrug and I now have no memory at all of even what sort of music it is.

I’ll give it another go though before voting or deciding not to vote.

Never got the love for this. I’m sure it’s a good album given how highly it’s thought of, but does nowt for me.

Gonna listen tomorrow. Last few times I tried it it was like some kind of Austin Powers pastiche…

It’s a really great record - vibrant, melodic and exciting but with that suggestion of being in the brink of breaking down into something a bit wilder.

Personally I slightly prefer Odessey and Oracle for my late sixties melodic psychedelia and either of the first two 13th Floor Elevators albums (especially Easter Everywhere) for the more visceral thrill, but Forever Changes is still wonderful. A high 9.

That’s the only track I know as well and that’s only because I have the Damned’s cover on a playlist. Looking forward to finally giving the album a play

Absolutely perfect… apart from that lyric about snot. 9/10.

I came to this album pretty late on (6 or 7 years ago probably). I only knew Alone Again beforehand. The first few listens really didn’t go well as it felt quite dated to start with. But I slowly became obsessed particularly with You Set the Scene which is by far and away my favourite song on the album, and the rest of it slowly grew on me. I rinsed it a lot for a good few months but haven’t listened to it much recently. (No slur on the album, my listening habits just changed.)

Think it’s probably a 9, but need a refresher to make sure.

It is damn good though. Think I tried another album by Love which didn’t gel at all, but can’t remember which one now. Did they ever come close to matching this?

I reckon, when it all comes down to it, and if you really really wanted me to answer, I’d say this was my favourite record. It’s almost definitely the one I’ve listened to the most.
When I was 15/16 in about 2000, I was coming out of my massive Britpop phase and listening pretty much exclusively to Nirvana and RATM. Then me and my mate James read one of those Q (I think) hundred greatest albums of the last century lists and he said that he had a copy of FC somewhere his dad had given him and we should give it a go. That exact moment is probably responsible for about 75-80% of my music taste now. From the very first listen I was absolutely captivated by this bizarre, brooding, joyous, astonishing thing.

The fact that Arthur Lee was 21 when FC was written is absolutely mind-boggling to me. The mix of the mundane, the spiritual, the emotional, the surreal and the abstract in the lyrics is incredible and there are still lines you really notice for the first time years after first listening. At it’s heart, Forever Changes is a psychedelic pop record. Through all the intensity, the dark themes, the turbulence surrounding it’s recording, it’s a melodic masterpiece and the songs will stay with you for hours, days afterwards.

Alone Again Or is one of the strongest album openers of all time, and You Set The Scene is THE best closer (beating Jungleland into a close second). Maybe The People Would Be The Times… is lyrically wonderful and playful and stands out as probably my favourite on there. Yeah, there are a couple of individual tracks that drag a little (Old Man and The Good Humour Man… for me) but as a whole entity it’s perfect.

I saw Arthur Lee do FC in full in Exeter in 2004 and it remains the best gig I’ve seen. It was in a pretty small venue and the connection between artist and audience was incredible to experience. I grabbed a setlist afterwards and he signed it for me (my friend only had a £5 note available and he refused to sign it cause he didn’t want to ‘get arrested for disrespecting the queen or some shit’) and it’s one of my most prized possessions.

Forever Changes is chameleonic in it’s suitability to soundtrack things for me. Happy occasions, sadness, depression, sunny days, long walks, short drives, it fits every mood and that’s a testament to both its complexity and its simplicity I think. 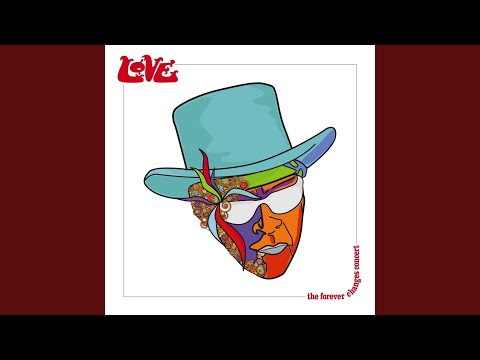 There’s a bit at the climax of this just after 6 minutes, where he’s repeating the word “time” and then just yells “YEAH” and it’s such a triumphant thing, always loved that.

The horns at the end of that song are fucking majestic.

One of the greatest ever songs.

It’s a 10 from me. Just an incredible album from start to finish

The album is the definition of gorgeous. Although it was born during ‘the summer of love’, and drenched in psychedelia, there’s a really dark, foreboding undertone to the album which I love. It’s a 10. One of the top 20 albums of the 20th century. It’s just a masterpiece. Saw Arthur perform it in its entirety back in 2003 and I still can’t believe I witnessed it.

5/10. Tried to get into it a few times but I just find it boring and cheesy